Parley Baer was an American radio, film and television actor.  He performed in more than 250 movies and television shows in a career spanning nearly six decades.  Baer began his career as a performer with the circus and developed an affinity for animals, both of which became lifelong interests.  During fallow periods in his acting career, he returned to performing with circus and animal acts, serving as a ringmaster for Circus Vargas and Barnum & Bailey, a board member of the community L.A. Circus, a docent at the Los Angeles Zoo, publicity writer for Al. G. Barnes Circus, and performing in an act with seven tigers at Jungleland in Thousand Oaks, California.

Thomas "Tom" Snyder was an American news anchor, as well as radio and television personality who appeared in just three television shows during his 40-year career.  He graduated from Marquette University in Milwaukee, Wisconsin, having majored in journalism. In the 1960s, he was a local news anchor in Cleveland, Philadelphia, New York City and Los Angeles.  After segueing into late night television in the early 1970s, he continued to anchor the news.

Snyder came to national fame as a fixture in late night television, hosting the long-running "Tomorrow Show" (1973–1982), and later "The Late Late Show with Tom Snyder" (1995–1998).  Later, Dan Aykroyd would parody him and his laconic chain-smoking interview style and spontaneous bursts of laughter on "Saturday Night Live."  In between his late night stints, Snyder anchored the news in broadcast television and hosted a radio talk show, eventually yielding both media to a new generation of hosts (Rush Limbaugh in radio and David Letterman in broadcast).  He made one appearance in THE RIFLEMAN, portraying Pete in "A Friend in Need" (episode 123). 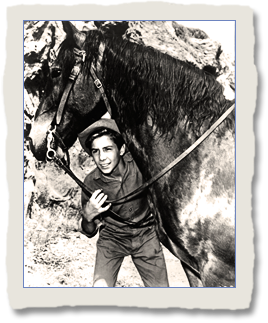 Lucas is stunned when Mark is kidnapped and a $5,0000 ransom is asked for his return.  Unable to pay the exorbitant amount, he mortgages his ranch to a long-time friend to get the money, but when he delivers the ransom, he finds his "friend" is part of the sinister plot.