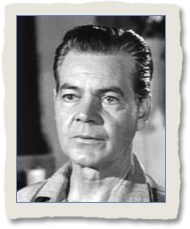 Eddie Quillan was an American actor whose career as a performer spanned more than 70 years.   Born in Philadelphia, his career began at age seven, first appearing in a vaudeville act, "The Rising Generation," with his siblings and later playing in a succession of silent films.  He had a natural gift for comedy and his vibrant personality and expressive face garnered Quillan mostly comedic parts and supporting roles.

Quillan appeared in THE RIFLEMAN twice in the fourth season playing Angus Evans, the Gunsmith—first in "Mark's Rifle" (episode 150), then in "Conflict" (episode 155).  He guest-starred in numerous other Westerns throughout much of his long career, including "Death Valley Days," "Gunsmoke," "The Guns of Will Sonnet," "Daniel Boone," "The Virginian," and "The Wild, Wild West."  Quillan made his last television appearance in Andy Griffith's show, "Matlock" in 1987.  He passed away in 1990.

Rhodes Reason is an American actor who has worked primarily in television.  He has appeared in more than 60 movies and television shows during a 20-year career.  He made his acting debut at age 18 in a production of "Romeo and Juliet," directed by Charles Laughton.  Among his film appearances were roles in "Yellowstone Kelly" (1959), starring Clint Walker, and the Vincent Sherman drama "A Fever in the Blood" (1961), starring Efrem Zimbalist, Jr. and Angie Dickenson.  He portrayed Daddy Warbucks in the Broadway musical "Annie" during the 1980s.

While out on a cougar hunt, a frightening incident causes Lucas to lose faith in his ability as a rifleman.  His resulting worry and ill temper begin to alienate his friends and almost get him into an all-out gun battle.