Tony Haig is an American film and television actor.  He has appeared in nearly 30 movies and television shows in a career spanning more than 50 years.  He began acting as a child and remains active to this day.  He has guest-starred in various popular television shows, including the family series "Shirley Temple Theatre" (1958–1961), the adventure series "Route 66" (1960–1964) and the crime dramas "Police Story" (1973–1977) and "The Streets of San Francisco" (1972–1977).  Haig also has had a few minor film roles, including the second officer in the sci-fi film "The Swarm" (1978), starring Michael Caine, Katharine Ross and Richard Widmark, and he portrayed Jack in the horror film "The Clonus Horror" (1979), starring Peter Graves.  In addition to his accomplishments as an actor, Haig was the producer of the comedy short "Game Night" (2011).  Haig made one appearance in THE RIFLEMAN, portraying Percy in "Hostages to Fortune" (episode 160).  He also guest-starred in several other westerns of the 1950s and 60s, including "Zane Grey Theater" (1956–1961), starring Dick Powell, "Have Gun – Will Travel" (1957–1963), starring Richard Boone, "Rawhide" (1959–1966), starring Clint Eastwood, and "Gunsmoke" (1955–1975), starring James Arness.

Isaac Stanford Jolley, Sr. was a prolific American character actor of radio, stage, film and television.  He appeared in 365 movies and television shows during a career spanning 30 years.  As a child, he toured with his father's traveling circus.  Perhaps as a result, he began his acting career in vaudeville and stock theater.  Eventually he made it to Broadway, debuting on the stage opposite Charles Trowbridge in "Sweet Seventeen" (1924).  During this period, he also worked in radio; however, it would not be until 1935 that Jolley found his way to Hollywood.  Once there, he began refining his villainous personae, enhanced by his slim profile and pencil-thin mustache.  For much of his career, he worked for B-tier companies, including Monogram and PRC.

Andy Marten made one appearance in THE RIFLEMAN, portraying a member of the townsfolk in "Hostages to Fortune" (episode 160).

Paul Mazursky, born Irwin Mazursky in New York City, is a film and television actor, as well as distinguished director, producer and screenwriter.  He has appeared in more than 70 movies and television shows during a career spanning nearly 60 years.  Following his graduation from Brooklyn College in 1951, Mazursky made his film debut as Pvt. Sidney in Stanley Kubrick's first feature film, the military action adventure "Fear and Desire" (1953), in which he co-starred with Frank Silvera and Kenneth Harp.  His other film roles include Emmanuel Stoker in the social commentary film "Blackboard Jungle" (1955), starring Glenn Ford, Anne Francis, Louis Calhern and Sidney Poitier; and Teddy Peppers in the crime thriller "2 Days in the Valley" (1996), starring James Spader, Danny Aiello, Peter Horton and Teri Hatcher.

Mazursky has guest-starred in a few popular television shows, including Rod Serling's iconic anthology series, "The Twilight Zone" (1959–1964) and the drama "The Sopranos" (1999–2007).  He has also played a few recurring roles, including Phil Brooks in the family drama "Once and Again" (1999–2002) and Norm in the Larry David comedy "Curb Your Enthusiasm" (2000– ).  He made two appearances in THE RIFLEMAN, playing the uncredited part of Shorty in "Shotgun Man" (episode 69), and Sylvester Bulgutch in "Hostages to a Fortune" (episode 160).  Mazursky also co-wrote "Tinhorn" (episode 134).

Robert "Rusty" Stevens is an American actor who has worked primarily in television.  A former child actor, he has appeared in 14 movies and television shows during a career spanning nearly 40 years.  Although primarily a television actor, he had an uncredited role as Sonny Pollitt in the Tennessee Williams classic film adaptation of "Cat on a Hot Tin Roof" (1958), starring Elizabeth Taylor, Paul Newman and Burl Ives.  He guest-starred in several popular television shows of the 1950s and 60s, including the crime dramas "Racket Squad" (1950) and "77 Sunset Strip" (1958–1964), and the family comedy "My Three Sons" (1960–1972); however, he is most recognizable for his role as Larry Mondello in the iconic family comedy "Leave It to Beaver" (1957–1963), a role that he reprised in the TV movie "Still the Beaver" (1983), as well as the series reboot "The New Leave It to Beaver" (1983–1989).  Stevens made one appearance in THE RIFLEMAN, portraying Melvin in "Hostage to Fortune" (episode 160).  He also guest-starred in the western "Wagon Train" (1957–1965), starring John McIntyre and Ward Bond.

Daniel White was an American radio, film and television actor.  He appeared in more than 250 movies and television shows during a career spanning nearly 40 years, with many of his film roles uncredited.  He entered show business at the age of 14, traveling throughout the south participating in tent, minstrel, vaudeville and theatrical shows.  Grappling with financial difficulties, White took a break from acting to work for the Civilian Conservation Corps.  Following that stint, he worked on the Pan American Highway.  After returning from Panama, he found work with Republic Pictures Corporation and worked primarily in B-westerns, more often than not playing a villain.  He was offered the role of "Sam the bartender" in "Gunsmoke" (1955–1975), but turned it down; although, he guest-starred in six episodes, twice playing a bartender (uncredited). 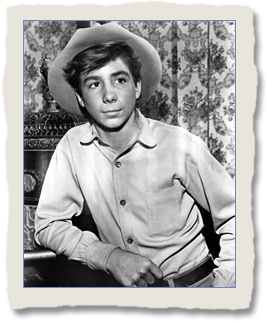 Lucas' faith in his son's honesty is shaken when he hears rumors that Mark may be mixed up with some thieves.  He finally confirms Mark's innocence, but only after he has painfully faced the lack of understanding in himself.