Conlan Carter, born Chester Conlan Carter, is an American television and film actor.  He has appeared in nearly 40 television shows and movies over a career spanning more than 25 years.  Raised on a farm in rural Missouri, Carter attended Southeast Missouri State University in Cape Girardeau on an athletic scholarship.  He then joined the United States Air Force and served two years, during which he developed a lifelong interest in flying.  Following his military service, Carter went to San Francisco where he studied under Mara Alexander Gilbert at the Bay City Actor's Lab.  He demonstrated great versatility as an actor, and played roles in genres ranging from crime dramas to action series to westerns.  Among the handful of recurring characters, he portrayed C.E. Carruthers in "The Law and Mr. Jones" (1960–1962) and Doc in "Combat!" (1962–1967), a role for which he received a 1964 Emmy nomination for Outstanding Performance in a Supporting Role by an Actor.

John Craig, born Joseph Cline, Jr., is an American stage, film and television actor.  He has appeared in more than 20 movies and television shows in a career spanning two decades.  Among his notable credits, Craig guest-starred in an episode of the immensely popular family drama "Little House on the Prairie" (1974–1983).  Craig made one guest appearance in THE RIFLEMAN, portraying Bo Jackman in "Which Way Did They Go?" (episode 167).  He also guest-starred in the westerns "Tales of Wells Fargo" (1957–1962), "Wagon Train" (1957–1965) and "Rawhide" (1959–1966), starring Clint Eastwood.

Leo Gordon was an American character actor of film and television, as well as a screenwriter.  He had nearly 200 acting credits in a career spanning more than 50 years.  Gordon had a rough start in life, raised in poverty during the Great Depression, serving in World War II and eventually being sentenced to a four-year prison term at the infamous San Quentin state prison in California for armed robbery.  After serving time in prison, Gordon took advantage of the G.I. Bill and enrolled in acting classes at the American Academy of Dramatic Arts in New York.  As an actor, Gordon was typecast as the brutish villain.  He received the "Golden Boot Award" in 1997 for his contributions to the western genre.  Gordon made two appearances in THE RIFLEMAN, portraying Abe Jordan in "The Angry Gun" (episode 12) and Stack Wade in "Which Way Did They Go?" (episode 167).  In addition to THE RIFLEMAN, Gordon also guest-starred in "The Adventures of Rin Tin Tin" (1954–1959), "Frontier" (1955–1956) and "Cheyenne" (1955–1963).

Robert F. Hoy as one of Wade's Gang

Robert "Bobby" F. Hoy was an American film and television actor, as well as a director and stuntman.  He appeared in more than 160 movies and television shows during a career spanning nearly 60 years.  After serving in the United States Marines during World War II, Hoy decided to pursue a career in show business.  He worked as a stunt double for many acclaimed actors, including Charles Bronson, Tony Curtis, Audie Murphy, Tyrone Power, Jay Silverheels and David Janssen.  In 1961, Hoy co-founded the Stuntmen's Association of Motion Pictures.

Hoy's most famous role was the recurring character of Joe Butler in the western series "The High Chaparral" (1967–1971).  He made three appearances in THE RIFLEMAN, portraying Lester in "Woman from Hog Ridge" (episode 78), Dabbs in "The Promoter" (episode 87) and a member of Wade's gang in "Which Way Did They Go?" (episode 167).  He guest-starred in many other westerns, the genre for which he was best-known and most fondly remembered, including "Have Gun – Will Travel" (1957–1963), starring Richard Boone; "Zane Grey Theater" (1956–1961), starring Dick Powell; "Wanted: Dead or Alive" (1958–1961), starring Steve McQueen; "Bat Masterson" (1958–1961), starring Gene Barry; "Branded" (1965–1966), starring THE RIFLEMAN's Chuck Connors; and "Bonanza" (1959–1973), starring Lorne Greene, Michael Landon, Dan Blocker and Pernell Roberts.  Toward the end of his life, Hoy was honored with a Golden Boot Award by the Motion Picture and Television Fund for making significant contributions to the western genre.  He made his final television appearance in the crime drama "NCIS" (2003– ).

Beatrice Kay was an American stage, radio, film and television actress, as well as a singer.  She appeared in nearly 20 movies and television shows during a career spanning 30 years.  She began acting in stock theater as a child, eventually going on to perform on the Broadway stage.  She hosted her own radio show during the early 1940s.  She was also a popular recording artist, known for "Mention My Name in Sheboygan" and "The Strawberry Blond."  She made her film debut as Claire Williams in the musical "Diamond Horseshoe" (1945), starring Betty Grable and Phil Silvers.  She had a few other film roles, including Sandy in the crime drama "Underworld U.S.A." (1961), also starring Cliff Robertson and Dolores Dorn.

Dal McKennon, born Dallas Raymond McKennon, was an American television and voice actor.  He appeared in nearly 180 television shows and shorts during a career spanning more than 50 years.  He attended the University of Washington prior to enlisting in the Army Signal Corps during World War II, but when he segued into acting, he became a familiar face on-screen.  His tall, gangly stature and unruly beard made him an easily recognizable character actor, and his voice was so malleable, he could contort it to play any kind of character.  McKennon is best-known for his voice work, having brought to life many iconic characters, including Woody Woodpecker's arch nemesis, Buzz Buzzard, and also Q.T. Hush, Gumby, Tintin, and many of the voices in the "Archie" cartoons.  His voice also can be heard in various Disney theme park attractions, as well as movies, including "Mary Poppins" (1964) and "Lady and the Tramp" (1955).  Among his film roles, he played small parts in the Alfred Hitchcock suspense thriller "The Birds" (1963) and the Elvis Presley vehicle "Clambake" (1967). 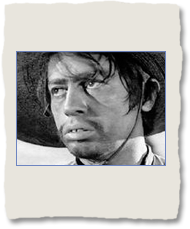 The Jackman family, a hilarious group of hillbillies, are installed as peace officers in a town near North Fork.  When these inept gun handlers are confronted by a real life bank robbing gang, their old friend Lucas helps them deal with the outlaws and retain their jobs.