Rodolfo Hoyos, Jr., was a prolific Mexican actor who worked primarily in television.  He appeared in 170 movies and television shows during a career spanning nearly 40 years.  He had a few film roles, including Capt. Ortega in the thriller "Seven Days in May" (1964), starring Burt Lancaster, Kirk Douglas, Fredric March and Ava Gardner; and a minor part in the romantic drama "Gilda" (1946), starring Rita Hayworth and Glenn Ford.

Donald "Don" Kennedy is an American actor who has worked primarily in radio and television.  He has appeared in 100 movies and television shows during his 60-year career, beginning as a radio announcer during the 1940s.  He was a contributor to NBC's "Monitor" radio show in the 50s, developing several characters.  He currently hosts "Big Band Jump," an internationally syndicated radio show devoted to music from the Big Band era.  Kennedy has received various honors for his work, including the Silver Circle Award, two Emmy awards, and awards from Pioneer Broadcaster and Georgia Broadcaster's Hall of Fame.

Steve Rowland, born Stephen Jacob Rowland, is an American television and film actor, in addition to being a singer, columnist and record producer.  During the 1960s, Rowland relocated to London, where he produced 13 Top Ten hits for Dave, Dee, Dozy, Beaky, Mick & Tich.  He also produced hits for P.J. Proby and The Pretty Things.  He received a gold album and an award from the American Society of Composers, Authors and Publishers during the 1970s.  While serving as the creative manager for Ariola Records, Rowland discovered and signed The Cure and the Thompson Twins, in addition to handling Boney M and Japan. 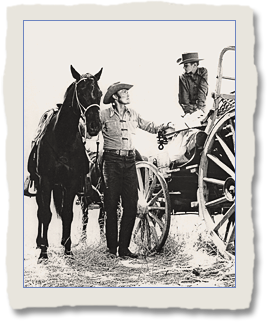 Two tough hired hands beat up Lucas and burn his ranch house, when he refuses their demands that he move off the property in order to please a wealthy cattleman who has been using the ranch as grazing land.  On foot, Lucas pursues the gunmen, finds himself facing their boss and is challenged to a vicious fistfight.