In addition to television, Collins made several film appearances.  He played the role of Mr. Qua in the Marilyn Monroe noir film "Niagara" (1953); he potrayed Mr. Hastings in "Bad Day at Black Rock" (1955), starring Spencer Tracy; and he played the part of Knapp in the Sidney Lumet film "Fail-Safe" (1964), starring Henry Fonda.

Kay Cousins Johnson, born Kay Levy, was an American actress who worked primarily in television.  Over a little more than a decade, Cousins guest-starred in 11 movies and television shows.  She made appearances in a few popular shows, including the comedy "Private Secretary" (1953–1957), starring Ann Sothern; the crime drama "M Squad" (1957–1960), starring Lee Marvin; Rod Serling's iconic sci-fi thriller series, "Twilight Zone" (1959–1964); and the spy genre meets western "The Wild Wild West" (1965–1969), starring Robert Conrad and Ross Martin.  Cousins may be best-known for her marriage to the actor Russell Johnson, who played the professor in Gilligan's Island.  Cousins made one guest appearance in THE RIFLEMAN, portraying Flo in "The Boarding House" (episode 22).

Charles Fredericks was an American film, stage and television actor.  He appeared in more than 70 movies and television shows during a 15-year career.  He guest-starred in the classic family comedy based on a comic strip of the same name, "Dennis the Menace" (1959–1963), starring Jay North, the crime dramas "The Untouchables" (1959–1963), starring Robert Stack, and "77 Sunset Strip" (1958–1964), starring Efrem Zimbalist, Jr., and also the comic superhero adventure "Batman" (1966–1968), starring Adam West.  Despite his high visibility in a wide variety of television genres, Fredericks is best-remembered for his career in B-Western movies and TV shows.  He was also a talented tenor, which earned him the roles of Gaylord Ravenal in the revival of the Broadway play "Show Boat" (1946) and Captain Nicholas Gregorovitch in "Music in My Heart" (1947).  He portrayed the singing King in "My Fair Lady" (1964). 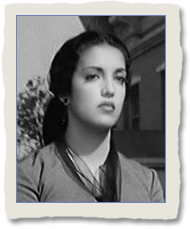 Katy Jurado was born Maria Cristina Estela Marcela Jurado Garcia, in Guadalajara, Jalisco.  She was the first Mexican actress to be nominated for an Academy Award.  She began acting in Mexican films after divorcing her husband in 1943, appearing in "No Mataras" opposite the well-known Mexican actor Pedro Infante.  Jurado's performance brought her fame.  Discovered by John Wayne, she was introduced to American audiences with "The Bullfighter and the Lady" (1951) and went on to appear in many Hollywood movies.  In 1952, she starred in "High Noon," for which she earned a Golden Globe for Best Supporting Actress.  During the 1950's and 1960's, Jurado appeared in several Hollywood productions, including "Arrowhead" (1953), "Broken Lance" (1954), for which she received an Academy Award nomination.  Jurado also appeared in "The Racers" (1955), "Trial" (1955), "Trapeze" (1956), "The Badlanders" (1958), "One-Eyed Jacks" (1961), "Barabbas" (1961), "Stay Away, Joe" (1968), "Pat Garrett and Billy the Kid" (1973), "The Children of Sanchez" (1978) and "Under the Volcano" (1984).  Her last film performance was in the Mexican film, "Un Secreto de Esperanza" (2002).  Jurado appeared in one episode of THE RIFLEMAN, portraying Julia/Big Anna in "The Boarding House" (episode 22), which was directed by Sam Peckinpah.

Peggy Malley is an American film and television actress.  She has appeared in more than 70 movies and television shows during a 20-year career.  She was crowned Miss Atlantic City in 1942.  She is best-known for delivering the famous line "Hey, Johnny, what are you rebelling against?" to Marlon Brando in the outlaw biker film "The Wild One" (1953).  Her more memorable film roles include Jean in the noir film "Human Desire" (1954), starring Glenn Ford, Gloria Grahame and Broderick Crawford; and the blonde stripper Francine in the science fiction film "Indestructible Man" (1956), starring Lon Chaney Jr., Max Showalter and Marian Carr.

Charles Seel, born Charles Frederick Seel, was an American film and television actor.  He appeared in 130 movies and television shows during a career spanning nearly 40 years.  He had several film roles, most of them minor, including uncredited roles in the family comedy "Please Don't Eat the Daisies" (1960), starring Doris Day and David Niven; the romantic comedy "Donovan's Reef" (1963), starring John Wayne; and the action drama "Winning" (1969), starring Paul Newman; as well as the part of a bellhop in the Michael Crichton sci-fi thriller "Westworld" (1973), starring Yul Brynner, Richard Benjamin and James Brolin. Julia, a new arrival in North Fork, opens a boarding house and ingratiates herself with the townspeople, except Lucas, who remembers her as a dishonest card dealer in a gambling house several years earlier.  He reluctantly agrees to "wait and see" whether or not she has really turned over a new leaf.  In the interim, Julie's former boss, a vicious outlaw who specializes in knifing his victims, arrives in North Fork.  He tries to bully Julia into letting him turn her boarding house into a saloon and gambling house.  When Julia refuses, Lucas knows she has really reformed and faces the man's knife himself to protect her.