Joe Haworth was an American film and television actor, in addition to being a notable Hollywood photographer.  Born into an acting family, Haworth appeared in more than 100 movies and television shows during his 40-year career.  Most of his movie roles were uncredited; although, he appeared in many film classics, including the noir film "Thieves' Highway" (1949), the war dramas "Gung Ho!: The Story of Carlson's Makin Island Raiders" (1943), which was his film debut, "Red Badge of Courage" (1951) and "The Caine Mutiny" (1954).  He also appeared in the action-adventure film "3:10 to Yuma" (1957), and Stanley Kubrick's Oscar-winning film based on the novel of the same name, "Spartacus" (1960).  Haworth also appeared in the western "The Royal Mounted Rides Again" (1945), in which he replaced Addison Randall, who was killed on the first day of filming.

Michael Landon as Will Fulton 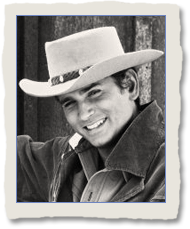 Michael Landon was an American actor, writer, director and producer, whose prolific career spanned 35 years.  He appeared in two episodes of THE RIFLEMAN, playing Will Fulton in "End of a Young Gun" (episode 3) and Billy Mathis in "The Mind Reader" (episode 40).  Over three decades, he went on to star in three popular NBC TV series.  He is widely known for his roles as Little Joe Cartwright in "Bonanza," Charlie Ingalls in "Little House on the Prairie," and Jonathan Smith in "Highway to Heaven."  Landon was nominated for a Golden Globe award in 1979 for his role in "Little House on the Prairie."  He produced, wrote and directed many of the series' episodes, including the short-lived production, "Father Murphy," which starred his friend and "Little House" co-star Merlin Olsen.  In 1976, Landon wrote and directed an autobiographical movie, "The Loneliest Runner," and was nominated for two Emmys.  He also hosted the annual long-running NBC coverage of the "Tournament of Roses Parade" with Kelly Lange. The Western Writers of America honored Landon with a Bronze Wrangler Award in 1971 for "Bonanza" and again in 1981, with a Spur Award for Best Script for "May We Make Them Proud," a 1974 episode of "Little House on the Prairie." 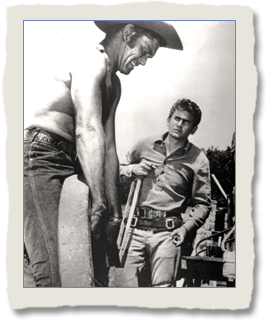 Lucas is forced to give refuge to a young bank robber who has been injured while saving the life of Lucas' young son Mark.  Trouble ensues when the rest of the outlaw gang appear.  The young robber has had a change of heart and wants to go straight, but the gang insists that he will rejoin them.  Wanting to help the young man, Lucas is caught in the fight.