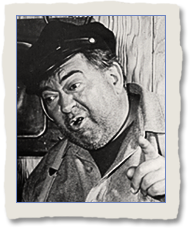 Thomas Gomez was an American television, stage and film actor.  His filmography includes nearly 100 roles during a career spanning 30 years.  He made his film debut in "Sherlock Holmes and the Voice of Terror" (1942).  Gomez received an Academy Award nomination for Best Supporting Actor for his role in the 1974 film "Ride the Pink Horse." 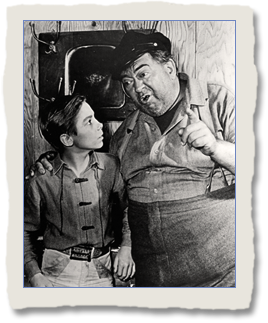 Mark returns home from school and along the way stumbles on the body of an unidentified man.  Lucas investigates, discovers the man was stabbed to death, and the only clue to his identity is a belt inscribed with the initials R. M.  He goes into town to report his findings to Marshal Torrance, leaving Mark in the care of Artemus Quarles, a distant cousin by marriage and a jack-of-all trades who is visiting the McCains.  Mark is enchanted with his tales of pirates and buried treasure, and he is convinced that Quarles is a wonderful man, until he finds a gun belt with the initials R. M. hidden in Quarles' wagon.  Quarles threatens the boy to discourage him from telling Lucas about the guns, which would draw suspicion for the killing, but Lucas arrives home in time to rescue Mark from harm.