Mel Allen as a Wrangler

Mel Allen, born Melvin F. Allen, was an American actor.  He appeared in more than 20 movies and television shows during a 25-year career.  His first film appearance was an uncredited role in "The Return of Dracula" (1958).  Allen made one appearance in THE RIFLEMAN, playing the part of Sweeney in "Miss Bertie" (episode 90).  In addition to THE RIFLEMAN, he also guest-starred in "The Big Valley" (1965–1969). 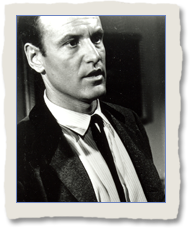 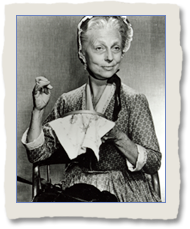 Agnes Moorehead was an American actress whose distinguished career spanned three decades.  She appeared in more than 70 films and numerous television series.  In her early career, she was a busy performer in radio.  Her first screen credits included Orson Welles' "Citizen Kane" (1941) and "The Magnificent Ambersons" (1942). Moorehead was nominated for four Academy Awards and won an Oscar for Best Supporting Actress for "Hush... Hush, Sweet Charlotte" in 1964.  She also was nominated for two Golden Globe Awards and six Emmy's.   She won an Emmy Award for her role in the television series "Wild, Wild West" (1967).  Equally adept in dramatic and comedic roles, she is best-known for playing Endora, mother of Elizabeth Montgomery's character Samantha in the hit ABC television sitcom, "Bewitched" (1964-1972).  Moorehead made one appearance in THE RIFLEMAN, portraying the title role in "Miss Bertie" (episode 90).

Leonard Stone as the Gambler

Stone had several recurring roles, including Doc Joslyn in the comedy series "Camp Runamuck" (1965), Lenny in the comedy "Alice" (1976–1985), Judge Carl Fuller in the primetime drama "Falcon Crest" (1981–1990), and Judge Paul Hanson in the legal drama "L.A. Law" (1986–1994); however, he is best-remembered for his portrayal of Mr. Beauregarde in the film adaptation of the Roald Dahl children's fantasy "Willy Wonka and the Chocolate Factory" (1971), starring Gene Wilder.  In addition to his most famous role, Stone played the role of Charles in the sci-fi drama "Soylent Green" (1973), starring Charlton Heston and Leigh Taylor-Young.  Stone made two appearances in THE RIFLEMAN, portraying the gambler in "Miss Bertie" (episode 90) and KC in "Deadly Image" (episode 132).  He also guest-starred in the westerns "Rawhide" (1959–1966), starring Clint Eastwood, "The Virginian" (1962–1971), starring James Drury, and "Gunsmoke" (1955–1975), starring James Arness. 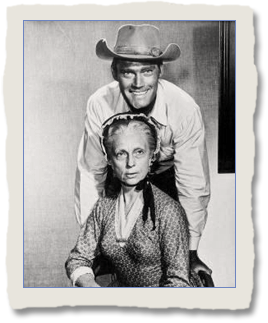 A sprightly little old lady arrives in North Fork and announces to Lucas and Micah that she plans to capture a notorious bandit single-handed.  She needs the reward money to support herself in her declining years, and no amount of argument from Lucas or Micah will dissuade her.  Much to everyone's surprise, she succeeds in her plan in a most amazing way.