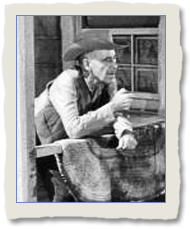 Dawson appeared in one episode of THE RIFLEMAN, "Six Days and A Year" (episode 91).  He portrayed Harley Hannabury, a recurring character played by Ian Murray in six other episodes.  Dawson made appearances on many television shows throughout the 1950's, 60's and 70's.

Dawson was a lifelong member of the Masquers Club, and later in life was made an honorary member of the Pioneers of Radio Club.  He made his last television appearance in "What's Happening!!" in 1979 and passed away in 1987.

James Gavin was an American film and television character actor, as well as a stuntman.  He appeared in nearly 60 movies and television shows over a period of two decades beginning in the late 1950s.  Ruggedly built and craggy-faced, he was cast to type in numerous westerns, war and crime dramas.  Among his TV credits, he appeared in the crime dramas "Perry Mason" (1957–1966) and "Ironside" (1967–1975), both starring Raymond Burr, "Dragnet" (1951–1959), starring Jack Webb, and Rod Serling's iconic anthology series, "The Twilight Zone" (1959–1964), and the espionage adventure "Mission: Impossible" (1966–1973), starring Peter Graves.

Regina Gleason is an American television and film actress who has appeared in more than 40 movies and television shows in a career spanning a little over two decades.  She has guest-starred in a variety of television shows, including the nautical action-adventure series "Sea Hunt" (1958–1961), starring Lloyd Bridges, the classic family comedy based on a comic strip "Dennis the Menace" (1959–1963), starring Jay North, and the crime dramas "Highway Patrol" (1955–1959), starring Broderick Crawford, "Perry Mason" (1957–1966) and "Ironside" (1967–1975), both starring Raymond Burr.  Gleason made one appearance in THE RIFLEMAN, portraying Sarah Marston in "Six Years and a Day" (episode 91).  She also guest-starred in other popular westerns of the 1950s and 60s, including "Death Valley Days" (1952–1975), starring Robert Taylor, "Have Gun – Will Travel" (1957–1963), starring Richard Boone, and "Bonanza" (1959–1973), starring Lorne Greene, Dan Blocker, Pernell Roberts and Michael Landon.

Ron Hayes was an American actor who worked primarily in television.  He appeared in more than 70 television shows during his 30-year career.  Born into an acting family, Hayes had a resonant voice, handsome features, and was a natural performer—he never had trouble finding work as an actor.  After graduating from Stanford University with a degree in foreign relations, he served as a Marine during the Korean War, and following his service, he found his true calling in environmentalism, where his acting skills and natural gift for oratory often helped him in his role as a spokesman.  He was involved with the Sierra Club and eventually co-founded his own environmental group, Wilderness World.  In 1970, he was one of the co-founders of Earth Day.

Larch played several recurring roles, including Lt. Michaels in the crime drama "The Walter Winchell File" (1957–1958), Deputy DA Jerry Miller in the crime drama "Arrest and Trial" (1963–1964), Gerald Wilson in the Aaron Spelling drama "Dynasty" (1981–1989) and Arlen Ward in the primetime soap opera "Dallas" (1978–1991).  He also had a few significant film roles, including Sgt. McCallum in the suspense drama "Play Misty for Me" (1971), starring Clint Eastwood; the chief in another Clint Eastwood film, "Dirty Harry" (1971), and Father Nuncio in the horror film "The Amityville Horror" (1979), starring James Brolin and Margot Kidder.

Lucas persuades an alcoholic, a former doctor now barred from practice because of his drinking, to set aside his plans to seek revenge on the man whom he feels ruined his medical career.  Lucas helps him to regain his self-respect and a new future after he persuades the man to forget his feud and help a desperately sick woman.