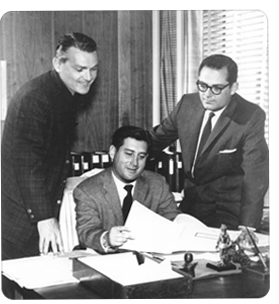 Levy-Gardner-Laven Productions, Inc. is the longest lasting partnership in the motion picture industry.  Established in 1951, it is based in Beverly Hills, California.  The principals, Jules V. Levy, Arthur Gardner and Arnold Laven, met while serving in the Army Air Force's First Motion Picture Unit during World War II.  The Unit was formed by Jack L. Warner, President of the studio.  While serving together under Ronald Reagan, they decided to create their own production company after the war ended, and several years later formed Levy-Gardner-Laven Productions.  The company launched its first film, "Without Warning," the following year.  Levy-Gardner-Laven produced numerous theatrical motion pictures and a string of successful television series.

The three producers won numerous awards, including The Los Angeles Metropolitan District Award from the California Federation of Women's Clubs in 1959, an NAACP Image Award in 1967 for "The Big Valley," a Screen Producers Guild Certificate of Nomination, a Golden Boot Award (1992), Photoplay Magazine Award for most popular TV program for "The Big Valley," TV Radio Mirror Magazine Award for TV's Best Western Series for "The Rifleman," The Patsy Award from the American Humane Association for their film "The Scalphunters."

"The Rifleman" was awarded a Screen Director's Guild Certificate of Nomination for Best Produced TV Series of 1959, and also was nominated for an Emmy in the Best Western Series category for the show's 1958–59 season.

In 1972, Levy-Gardner-Laven became the sole copyright proprietor of THE RIFLEMAN and has actively syndicated the television series worldwide to this day.