CHUCK CONNORS
— "LUCAS McCAIN"
Born Kevin Joseph Aloysius Connors in Brooklyn, New York on April 10, 1921, Connors was the elder of two children whose parents, originally from Ireland, had immigrated to the US via Newfoundland. As a child of the Depression, he grew up poor in a family that knew hard times, with his mother doing menial jobs and his father perennially unemployed, eventually landing a job as a bank guard in New York City. Young Kevin Connors played baseball on the sand lots as a kid and displayed such exceptional ability that he was given an athletic scholarship at Adelphi Academy, making him one of the few youngsters ever to win a prep school scholarship for sports. Upon graduation from Adelphi, more than 25 colleges offered Connors athletic scholarships. He cast his lot with Seton Hall University in South Orange, New Jersey, where he developed his natural athletic ability. At college, he added basketball to his sports schedule and was instrumental in leading the Seton Hall team to national prominence as a basketball power. He acquired the nickname "Chuck" in South Orange, and it stuck.

Although he attended Seton Hall on a sports scholarship, Connors was a serious student and enrolled as an English major. He soon demonstrated a flair for performing by entering and winning an elocution contest in his freshman year. He recited Vachel Lindsay's sonorous poem, "Congo." Winning the contest made him consider for the first time the prospect of pursuing an acting career. He left Seton Hall after two years, and in 1940, he was signed by the Brooklyn Dodgers as an amateur free agent, but by the summer of 1942, had moved to the New York Yankees' minor league organization.

In October 1942, Connors enlisted in the Army at Fort Knox. He was stationed at Camp Campbell, Kentucky, and later at West Point, New York, spending most of the war as an instructor in tank-warfare. While at West Point, during the winter months Connors moonlighted as a professional basketball player, and during the summer season he played semi-professional baseball. After being discharged from the Army in 1946, he joined the newly formed Boston Celtics basketball team. In 1946, he became the first player in the NBA to shatter a backboard. He got his first break to play baseball in the Major leagues with the Brooklyn Dodgers in 1949. He played just one season, then joined the Chicago Cubs in 1951, playing in 66 games, usually as first baseman and occasional pinch hitter. After one season, he was demoted and sent to the Los Angeles Angels farm club in the Pacific Coast League. If it was a disappointment to Connors at the time, later he would think of it very differently, saying in 1954, "Greatest break I ever got. I'm out there right in the middle of the movie business where, if a guy has anything, he's got the chance to break in."

Connors has the distinction of being one of just 12 athletes in the history of American professional sports to have played for both Major League Baseball and the NBA. Later, in 1966, Connors would play an off-field role in bringing Los Angeles Dodgers pitchers Don Drysdale and Sandy Koufax back to the negotiating table to resolve a contract dispute between the owners and players. During his stint on THE RIFLEMAN series, Connors invited several sports icons to make guest appearances on the show; they included baseball legend Don Drysdale, Duke Snider and football hall of famer Sid Gilman.

While playing professional baseball in southern California, Connors was spotted by an MGM casting director, who cast him in a small role as a police captain in the sports-themed romantic comedy "Pat and Mike" (1952), starring Katherine Hepburn and Spencer Tracy. The film featured a who's who roster of famous athletes making cameo appearances. He hung up his gloves and spikes and concentrated on developing his skills as an actor. In 1953, he appeared in the Burt Lancaster film "South Seas Woman" and in 1957, the Disney film "Old Yeller" and also "The Hired Gun." His portrayal of Burn Sanderson, owner of Old Yeller, would clinch him the role of Lucas McCain in THE RIFLEMAN—beating out 40 other actors vying for the part of a widowed rancher raising his young son in the American frontier of the 1880s. As the father of four boys in real life, playing a strong father figure came naturally to Chuck Connors. Standing 6'5", Connors' physical stature, rugged build and good looks also made him ideally suited for the role. He learned to shoot and do his own stunts to prepare for the role. The same year he was cast in the lead for THE RIFLEMAN, Connors was tapped by director William Wyler to play Buck, the trouble-making son of Hannassey (Burl Ives) in "The Big Country." It was the role regarded by critics and fans alike as his finest screen performance.

If segueing from baseball star to Hollywood actor seemed like an unlikely career transition, according to Connors, it was a snap. "Anytime a batter is called out on strikes, he acts plenty when he returns to the dugout. After all," he laughed, "he has to make the manager believe the umpire was wrong in his decision." Connors' histrionics were so effective that his teammates dubbed him "The Lawrence Olivier of the diamond." As the star of ABC-TV's western series, THE RIFLEMAN, however, he no longer had to worry about balls and strikes. 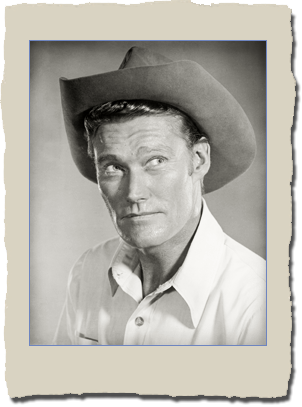 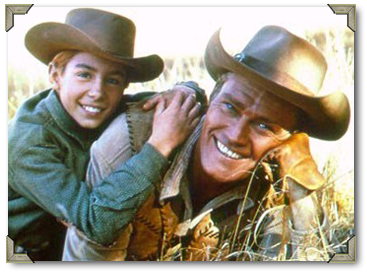 As Lucas McCain, Connors had two primary concerns in life—first, confronting and overcoming injustice with resolve, fair-mindedness and decency and second, making a home for his young boy, Mark, whose mother passed away. Father and son settle on a ranch near the frontier town of Northfork and begin forging a life in the New Mexico territory. The casting of Johnny Crawford as young Mark was an inspired choice. A little-known child actor, Crawford and Connors had a genuine chemistry playing father and son. Off-screen, Connors invited his young co-star to accompany him on camping trips with his own sons. Their warm bond persisted, and at Chuck Connors' memorial service, after passing away at age 71 on November 10, 1992, Crawford gave his TV father and real-life friend a moving eulogy.

While under contract to Four Star Productions for THE RIFLMAN series, Connors played the title role in the western biopic film "Geronimo" (1962). Over the next two and a half decades, he appeared in other films in a variety of genres, including the James Garner–Doris Day romantic comedy "Move Over, Darling" (1963). Connors went on to do several other series after THE RIFLEMAN, the best-known of which was "Branded" (1965–1966). He played the role of US cavalry officer Jason McCord, who was drummed out of the service on the strength of a false accusation of cowardice. The show aired for two seasons, with each of the 32 episodes having the disgraced captain roaming the West, attempting to redeem his reputation. He played Attorney Jim Egan in the crime drama "Arrest and Trial" (1963–1964), co-starring Ben Gazarra and Roger Perry, and he played Jim Sinclair in the short-lived adventure series, "Cowboy in Africa" (1967–1968). He continued to make film and television appearances, playing recurring characters in several series, including Jeb Hollister in "The Yellow Rose" (1983–1984), Janos Skorzeny in "Werewolf" (1987–1988) and Gideon McCay in "Guns of Paradise" (1989–1990). His portrayal of slave owner Tom Moore in the mini-series "Roots" (1977) earned Connors an Emmy award nomination. Connors received a star on Hollywood's "Walk of Fame" on July 18, 1984.

In one of his last on-screen appearances, Connors reprised the character of an aged Lucas McCain in the Kenny Rogers made for television movie "The Gambler Returns: the Luck of the Draw" (1991). In an interview with movie reviewer Leonard Maltin, Connors was asked if he felt somewhat bitter at carrying the mantle of his best-known role as Lucas McCain, and the actor was quick to reply that, on the contrary, he was proud to be associated with a show that was so admired and play a character who continued to be popular with fans. The year before he passed away, Connors was inducted into the Hall of Great Western Performers of the National Cowboy and Western Heritage Museum.