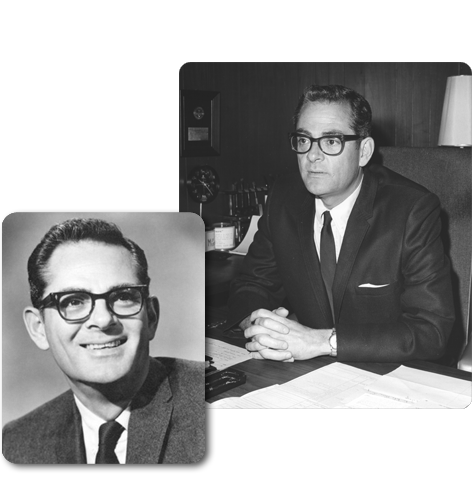 Arnold Laven was born on February 23, 1922, in Chicago, Illinois.  He moved with his family to Los Angeles in the late 1930's.  He began his career in the entertainment industry working as a mail room messenger at Warner Brothers.  During World War II, he and his friend Jules Levy enlisted in the First Motion Picture Unit in Culver City, California, to make training films for the USAAF.  There, in 1943, they met Arthur Gardner.  Although the trio agreed to start their own independent motion picture company after they were discharged from the Air Force, they did not form their company until 1951.  In the intervening years, Laven worked as a script supervisor.

Arnold Laven created the concept for THE RIFLEMAN series and directed many episodes, including the pilot, "The Sharpshooter."  He is credited with establishing the four main themes for this classic western:  the father-son relationship, family values, parables or stories with a moral lesson, and of course, the signature Winchester rifle.  These themes underlayed the storyline of every single episode over its 5-year run.  Following the death of Chuck Connors in 1992, "People" magazine quoted Laven, "Chuck's relationship with Johnny was just what we wanted, tough and straightforward, with love, but also a sense of making a boy be be prepared to grow."

Laven directed episodes of numerous television series in the 1960s and 70s, including the iconic westerns "The Big Valley" and "Gunsmoke," as well as "Marcus Welby MD," "Mannix," "Ironside," "The Six Million Dollar Man," "The Rockford Files" and "Fantasy Island."  He continued working into the 1980's, directing several episodes of "Hill Street Blues" and "The A-Team."

Arnold Laven's directing credits include 11 feature films made between 1952 and 1969, among them "Down Three Dark Streets," "The Monster That Challenged the World," "Slaughter on Tenth Avenue," "Anna Lucasta," "Geronimo," "The Glory Guys" and "Sam Whiskey."  Laven's best directorial turn in feature films was the 1956 MGM drama "The Rack," which starred Paul Newman, appearing in his second movie.  He portrayed a brainwashed Korean War POW returning home to face court martial for treason.

Arnold Laven passed away in Tarzana, California on September 13, 2009.  His wife of 58 years, Wallace Earle Sparks Laven, passed away on February 27, 2012.  They are survived by their two children, Barbara and Larry.  The "Los Angeles Times" interviewed Arthur Gardner after Laven's passing, who said of him, "Besides being a very talented guy, he was a very warm, friendly, kindly guy and made friends with everybody."