Paul Mantee, born Paul Marianetti, is an American actor who has worked primarily in television, especially in crime dramas and related genre.  He has appeared in more than 100 movies and television shows during a career spanning 40 years.  He studied journalism at San Mateo Junior College in California and enlisted in the US Navy during the Korean War.  Mantee got his first acting break when he was cast to play the lead role of Cmdr. Christopher "Kit" Draper in the science fiction film classic "Robinson Crusoe on Mars" (1964), also starring Victor Lundin and Adam West.  It would prove to be the role for which he is most well-known.  Among his other film characters were the doctor in the semi-biographical martial arts film "Dragon: The Bruce Lee Story" (1993), starring Jason Scott Lee, Lauren Holly and Robert Wagner; the reporter in the drama "Apollo 13" (1995), starring Tom Hanks, Kevin Bacon, Bill Paxton, Gary Sinise, Ed Harris and Kathleen Quinlan; and General Willard in "Memorial Day" (1998).

Danny Richards is an American film and television actor.  He has appeared in nearly 30 movies and television shows in just over a decade.  He has guest-starred in a few popular shows, including the classic family comedy of the 1950s, "Leave It to Beaver" (1957–1963).  He also had a recurring role as Franklin Sanders in the short-lived drama "Willy" (1954–1955).  Richards made two appearances in THE RIFLEMAN, portraying Swifty Sullivan in "The Pitchman" (episode 80) and reprising that role in "Assault" (episode 102).

Bob Sweeney was an American film and television actor who also had a prolific career as a producer and director.  He appeared in more than 30 movies and television shows during a career spanning 30 years.  He graduated from San Francisco State College, then began working in radio as an announcer and comedian.  He is known for having lent his voice to the "Sweeney and March Show" (1944–1948), in which he co-starred with Hal March on CBS radio.

Sweeney had a few roles in memorable films, including Johnny Degnan in the drama "The Last Hurrah" (1958), starring Spencer Tracy and Pat O'Brien; Cousin Bob in the Alfred Hitchcock mystery drama "Marnie" (1964), starring Tippi Hedren, Sean Connery, Diane Baker and Martin Gabel; and a minor part in the drama "A Raisin in the Sun" (1961), starring Sidney Poitier and Ruby Dee.  He made multiple appearances in "The George Burns and Gracie Allen Show" (1950–1958), and also guest-starred in the family comedy "The Adventures of Ozzie and Harriet" (1952–1966) and the suspense anthology series "Alfred Hitchcock Presents" (1955–1962), among many other shows.  He also had recurring roles playing Oliver Munsey in the family comedy "Our Miss Brooks" (1952–1956) and Gilly Box in the sitcom "Brothers" (1984–1989).  He also played the lead in his own comedy shows, "The Brothers" (1956–1957), co-starring Gale Gordon and Barbara Billingsly, and the title role in "Fibber McGee and Molly" (1959–1960), co-starring Cathy Lewis and Paul Smith.  Sweeney made two appearances in THE RIFLEMAN, portraying Speed Sullivan in "The Pitchman" (episode 80) and "Assault" (episode 102). 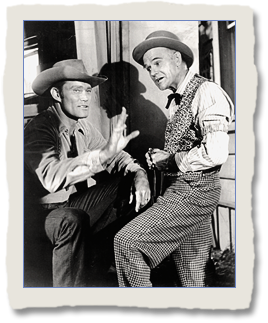 An amiable traveling salesman and his son are in North Fork plying their trade when the salesman gets into trouble. He is accused of forcing his attentions on a local belle, and no amount of protestation will convince the town of his innocence, until his friend Lucas steps in and uncovers the truth.