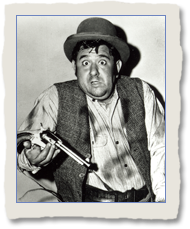 Buddy Hackett, born Leonard Hacker, was an American stage, film, voice and television actor; however, he is best-remembered for his work as a comedian.  He appeared in nearly 50 movies and television shows in a career spanning just over 50 years.  Hackett became interested in acting during his high school years, after directing a school production entitled "What a Life."  After serving in the army during World War II, he ventured into the entertainment industry as a stand-up comic, playing at venues from the Catskills to Las Vegas and Los Angeles.  He and Lenny Bruce are credited with pioneering "blue" comedy.  Their acts were built around adult humor and off-color jokes that were tame compared against later generations of comics.   After a rough start with a string of unsuccessful east coast stints, Hackett went on to become so successful that he could be the headliner at any major nightclub in the US.  He became well-known to mainstream America with his many appearances on late night talk shows hosted by Jack Paar, Arthur Godfrey, and later Johnny Carson.  He also was a frequent guest on the game shows "What's My Line" and "Hollywood Squares."

Having a gift for physical humor, with a rubbery face and doughy physique, Hackett was typecast as clownish characters.  His performances on stage and in film often were the most memorable feature in otherwise forgettable productions.  His performance, for example, portraying a Coney Island soothsayer in the play "I Had a Ball" (1964) transformed it from a critical failure into a box office success.  Seeing Hackett play serious roles did not resonate with audiences, so most of his movie and TV credits are for comedy-themed productions.  His film credits include the racy humor-tinged film adaptation of "God's Little Acre" (1958), the animated adventure "The Wonderful World of the Brothers Grimm" (1962), the musical comedy "The Music Man" (1962), and the madcap action-adventure film "It's a Mad, Mad, Mad, Mad World" (1963).  He also lent his voice to Scuttle in "The Little Mermaid" (1989).  In television, Hackett played the title role in the short-lived sitcom "Stanley" (1956–1957), co-starring Carol Burnett, and toward the end of his career, he played the recurring role of Uncle Lonnie in the comedy drama "Action" (1999–2000), starring Jay Mohr.  He made occasional appearances in popular shows over four decades, from the 1950s through the 90s, including the western "The Big Valley" (1965–1969), starring Barbara Stanwyck, Richard Long and Lee Majors, the Buck Henry comedy spy spoof "Get Smart" (1965–1970), starring Don Adams and Barbara Feldman, the comedy variety show "Rowan & Martin's Laugh-In" (1967–1973), the action-adventure "The Fall Guy" (1981–1986), starring Lee Majors, the mystery whodunit "Murder, She Wrote" (1984–1996), starring Angela Lansbury, and many other shows.  Hackett made two appearances in THE RIFLEMAN, portraying Daniel "Pop" Malakie in "BloodLines" (episode 42) and the title character in "The Clarence Bibs Story" (episode 104). 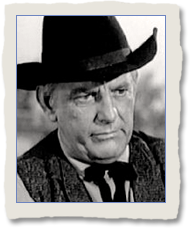 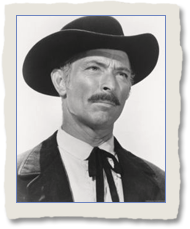 X Brands was an American actor who worked primarily in television, especially the western genre.  He appeared in more than 60 movies and television shows during a career spanning nearly 30 years.  He had a few memorable film roles, including Tago in the western "Escort West" (1958), starring Victor Mature, Elaine Stewart and Faith Domergue; Hook in the western "Santee" (1973), starring Glenn Ford and Dana Wynter; and Marty Brenner in the action drama "Avalanche" (1978), starring Rock Hudson and Mia Farrow.  Despite his European heritage, X Brands is best-remembered for his portrayals of Native American characters, particularly Pahoo-Ka-Ta-Wah in the western "Yancy Derringer" (1958–1959), co-starring Jock Mahoney and Kevin Hagen. 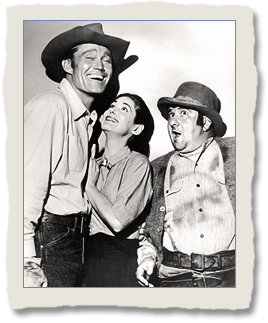 Bibs, an amiable slow-witted handyman in town, has secret dreams of becoming a famous gunfighter.  While practicing with a borrowed gun he stumbles and falls, the gun fires and kills a famous gunslinger.  In the resulting confusion and kidding from two town bullies, Clarence actually begins to believe he is faster with a gun than the man he accidentally killed.  His bragging gets him into real trouble when the dead man's partner arrives in town bent on revenge, and Lucas is saddled with the responsibility of protecting Bibs from his own exaggeration.