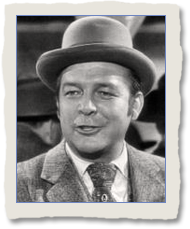 Gordon Jones was an American film and television actor whose career spanned more than 30 years.  Born in California, he broke into the movie business playing small roles and bit parts.  A big burly man, he played supporting characters, often appearing in slapstick roles and light comedies, even developing something of a reputation as a comical sidekick in the B-western genre.

His acting turn co-starring Eddie Cantor in "Strike Me Pink" (1936) garnered him a contract with RKO.  He appeared in a string of films in the 1930's and '40's.  He was cast against type as Britt Reid, the title character of "The Green Hornet" (1940) in the first of two Universal movie serials based on the old radio program.  Ironically, it was "The Green Hornet" role for which Jones is best remembered.  In the same year, Jones played the leading role of a rookie police officer in "I Take This Oath."

After serving a tour of duty in the military during World War II, Gordon returned to acting.  He played comic western villains in a succession of films, including the Danny Kaye classic "The Secret Life of Walter Mitty" (1947), the Abbott and Costello western send-up, "The Wistful Widow of Wagon Gap" (1947), and the "horse and bull" western, "The Untamed Breed" (1948).  He went on to play Mike the Cop, Lou Costello's nemesis, on "The Abbott and Costello Show" (1952–1954).

Gordon appeared other television series in the 1950's and early 60's, including "The Real McCoys," and he appeared in two episodes of THE RIFLEMAN, portraying the Carnival Barker in "The Wronged Man" (episode 27) and Vince Medford in "Stopover" (episode 107).

Jones continued to work in films; notably, he appeared in two successful Disney pictures, "The Absent-Minded Professor" and "Son of Flubber," in which he portraying harried school coaches.  His last film role was in John Wayne's western-comedy "McClintock!" (1963).

Bethel Leslie was an American stage, film and television actress, as well as a screenwriter.  She appeared in more than 100 movies and television shows during a career spanning 50 years.  She was discovered by theater producer and director George Abbott, who cast her in a production of the comedy "Snafu" (1944).  She went on to appear in many Broadway productions, including "Goodbye, My Fancy" (1948), "The Time of the Cuckoo" (1952), "Inherit the Wind" (1955), "Catch Me If You Can" (1965), and "Long Day's Journey Into Night" (1986), in which she played Mary Tyrone, a role that garnered her a Tony Award nomination for Best Performance by a Featured Actress in a Play.  She later reprised the role for a TV movie adaptation.  As a screenwriter, she composed scripts for various popular shows, including "Gunsmoke" (1955–1975), "Barnaby Jones" (1973–1980) and "Falcon Crest" (1981–1990).

Adam West, born William West Anderson, is an American film, stage, television and voice actor.  He has appeared in more than 180 movies and television shows in a career spanning nearly 60 years.  Prior to becoming an actor, West graduated from Whitman College in Walla Walla, Washington, earning a Bachelor of Arts degree in Literature, with a minor in Psychology.  Among his many film roles were his portrayals of William Lawrence III in the drama "The Young Philadelphians" (1959), starring Paul Newman and Barbara Rush; Col. Dan McReady in the sci-fi film "Robinson Crusoe on Mars" (1964), co-starring Paul Mantee and Victor Lundin; and a cameo role in the comedy "Drop Dead Gorgeous" (1999), starring Kirsten Dunst, Denise Richards and Ellen Barkin.  West is best-known for his portrayal of the title character (and alter-ego Bruce Wayne) in the campy superhero series "Batman" (1966–1968).  Although it was difficult to shrug off being typecast after his memorable superhero role, over the years, West revisited the role in various send-ups and spin-offs.  In recent years, he has lent his recognizable voice to the fictional Mayor Adam West in the popular animated comedy "Family Guy" (1999–present).  Other voice work includes other hit animated TV shows—"The Simpsons," "Rugrats," "Batman," "Animaniacs," "Jonny Bravo," "Spydogs," "The Super Adventure Team."  West also has performed voice roles for animated films, including Ace, Hollywood Chicken Little, in "Chicken Little" (2005), and Uncle Art in "Meet the Robinsons" (2007), both produced by Disney, and Leonard Fox in "Redux Riding Hood" (1998), which was nominated for an Academy Award for Best Animated Short in 1998. 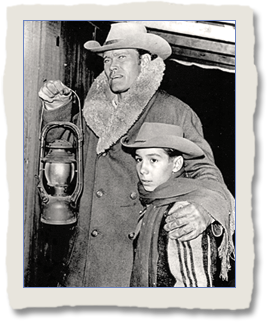 When a severe snowstorm makes the roads impassable, the North Fork stagecoach has to stop over for a night at the McCain ranch.  Lucas' neighborliness in giving the passengers shelter nearly causes trouble when the passengers turn out to be a former dance hall girl, a drunken whiskey salesman, and a well-known hired gun.