Kay E. Kuter, born Kay Edwin Emmert Kuter, was an American actor who worked in film, stage and television.  His filmography lists more than 120 movies and television credits in a career spanning 50 years.  Born into a show business family, his father was pioneer art director Leo "K" Kuter and his mother was silent screen actress Evelyn Edler.  After he graduated from Carnegie Mellon University, Kuter began acting and directed more than 50 plays.  He was typecast as a heavy and was known for his distinctive beard.  He guest-starred in many popular shows of the 1950s through the 90s, including the Disney adventure series "Zorro" (1957–1959), the family comedy "Mister Ed" (1958–1966), the action series "The Wild Wild West" (1965–1969), the family comedy "I Dream of Jeannie" (1965–1970), the western adventure series "Kung Fu" (1972–1975), Rod Serling's iconic anthology series, "The Twilight Zone" (1959–1964) and the sci-fi series "Star Trek: The Next Generation" (1987–1994).  He also had a recurring role as Newt Kiley in the comedy series "Petticoat Junction" (1963–1970) and "Green Acres" (1965–1970).  Kuter also worked as a voice actor, and among his many roles, provided the voices for Grimsby in "The Little Mermaid II: Return to the Sea" (2000); Griswold Goodsoup and Dockmaster Velasco in the acclaimed adventure games "The Curse of Monkey Island" (1997) and "Grim Fandango" (1998), respectively.

Joan Shawlee, also credited as Joan Fulton, was an American film and television actress.  She apppeared in nearly 100 movies and television shows during a career spanning 40 years.  She had roles in several memorable films, including Sylvia Hunter in the comedy "Buck Privates Come Home" (1947), starring Bud Abbott and Lou Costello; Sweet Sue in the comedy "Some Like It Hot" (1959), starring Marilyn Monroe, Tony Curtis and Jack Lemmon; Sylvia in the romantic comedy "The Apartment" (1960), starring Jack Lemmon, Shirley MacLaine and Fred MacMurray; and Amazon Annie in the horror film "Willard" (1971), starring Bruce Davison, Elsa Lanchester and Sondra Locke; as well as minor parts in the musical drama "A Star Is Born" (1954), starring Judy Garland and James Mason, and the crime thriller "Farewell, My Lovely" (1975), starring Robert Mitchum, Charlotte Rampling, John Ireland and Sylvia Miles. 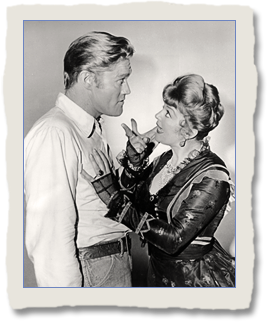 Lucas almost finds himself an unwilling bridegroom when two drunken cowhands play a joke on him.  Under Lucas' name, they write to a matrimonial agency in St. Louis, but the joke gets out of hand when a determined young lady arrives in North Fork and announces that she has come to claim her groom.