Philip Carey, born Eugene Josh Carey, was an American film television and film actor who appeared in nearly 100 movies and television shows in a career spanning almost 60 years.  Prior to working in the entertainment industry, he served in the United States Marines during World War II, in which he was injured, and the Korean War.  Tall and ruggedly handsome, he also had a deep mellifluous voice, and so, landed many assignments doing narration and voice-over, including the Granny Goose potato chips commercials.  His first acting job was a succession of different roles in the popular "Ford Theater" TV anthology series of the 1950s.  Carey would appear mutiple times or play recurring roles in many TV series, including Lieutenant Michael Rhodes in the adventure series "Tales of the 77th Bengal Lancers" (1956–1957), the title role in the crime drama "Philip Marlowe" (1959–1960) and Captain Edward Parmalee in the western "Laredo" (1965–1967).   He also guest-starred in other popular series of the 1950s and the 1960s, including the crime drama "77 Sunset Strip" (1958–1964) and numerous westerns, including "Tales of Wells Fargo" (1957–1962), "Lawman" (1958–1962), "Cheyenne" (1955–1963), "The Virginian" (1962–1971) and "Gunsmoke" (1955–1975).  Carey is best-known for his long-running portrayal of tycoon, Asa Buchanan, in the daytime drama "One Life to Live" (1968– 2008), which was also his final role.  Carey made one appearance in THE RIFLEMAN, portraying Dr. Simon Battle in "Death Trap" (episode 109).

James Drury is an American actor in television and film.  He has nearly 70 acting credits in a career spanning 50 years.  Frequently cast in westerns, in 1991, he was inducted into the Hall of Great Western Performers at the National Cowboy and Western Heritage Museum, Oklahoma City.  Among his more illustrious film credits, Drury appeared in the Sam Peckinpah western, "Ride the High Country" (1962).  Drury had his first major role in the western series "The Virginian" (1962–1971), portraying the title character. In 2000, he reprised the role in a TV movie homage, "The Virginian," to the 1960s series.

Steve Pendleton was an American film and television actor who appeared in more than 200 movies and television shows in a career spanning nearly 55 years.  Often credited as Gaylord Pendleton, he began acting during the silent film era.  Most of his roles prior to the 1950s were in film and included the character Bobby in the romantic drama "Manslaughter" (1930), starring Claudette Colbert and Fredric March; Ensign Richard "Dick" Cabot in the war drama "Seas Beneath" (1931), starring George O'Brien; Dennis Daly in John Ford's drama "The Informer" (1935); Interne Jones in the romantic crime drama "Internes Can't Take Money" (1937), starring Barabara Stanwyck, Joel McCrea and Lloyd Nolan; a gas station attendant in the film adaptation of John Steinbeck's "The Grapes of Wrath" (1940), starring Henry Fonda; Captain Prescott in the romantic western "Rio Grande" (1950), starring John Wayne and Maureen O'Hara; and Charlie Ford in the western "Gunfire" (1950), starring Don "Red" Barry. 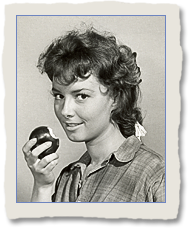 Gigi Perreau, born Ghislaine Elizabeth Marie Thérèse Perreau-Saussine, is an American film and television actress.  She has appeared in nearly 80 movies and television shows during a career spanning 70 years.  She made her film debut as the young daughter of scientist Marie Curie (portrayed by Greer Garson) in the biographical drama "Madame Curie" (1943), also starring Walter Pidgeon as Pierre Curie.  She was cast to play the role for her fluency in French.  At the age of ten, she was given the keys to the city of Pittsburgh for being the "top child movie actress of 1951," making her the youngest actress to receive the honor.  Like many actors who had successful careers as children Perreau struggled to maintain her popular appeal as an adult; although, her accomplishments were acknowledged later, including a star on the Hollywood Walk of Fame (1960) and a Former Child Star Lifetime Achievement Award.

Most of Perreau's many film roles were minor, including an uncredited part in the war drama "The Seventh Cross" (1944), starring Spencer Tracy; Julie in the musical drama "Song of Love" (1947), starring Katharine Hepburn; the character Roberta Blaisdell in the comedy "Has Anybody Seen My Gal" (1952), starring Charles Coburn; Ellen in the romantic drama "There's Always Tomorrow" (1956), starring Barbara Stanwyck and Fred MacMurray; and Susan Hopkins in the war drama "The Man in the Gray Flannel Suit" (1956), starring Gregory Peck, Jennifer Jones and Fredric March.

Larry Perron was an American actor who worked primarily in television.  He appeared in nearly 20 movies and television shows in a career of just under 10 years.  He guest-starred in a few popular shows of the 1950s and 60s, including the action series "Highway Patrol" (1955–1959), the crime drama "M Squad" (1957–1960), and the suspenseful anthology series "Alfred Hitchcock Presents" (1955–1962).  He also had an uncredited role in the romantic adventure film "Timbuktu" (1959), starring Victor Mature and Yvonne De Carlo.

John Pickard was a prolific American film and television actor with over 200 screen credits in a career spanning 50 years.  His first acting roles were mostly uncredited small roles, beginning with "Mary of Scotland" (1936), in which he played a dueling soldier.  During World War II, Pickard served in the United States Navy.  He returned to acting after the war and continued to play supporting roles in scores of westerns and action dramas before being cast to play the leading role of Captain Shank Adams in the TV western "Boots and Saddles" (1957).  Although most recognizable in the western genre, Pickard made appearances in a wide variety of popular TV shows of the 1960s through the 1980s, including the crime dramas "Dragnet" (1951–1959), starring Jack Webb as Sgt. Joe Friday, "Perry Mason" (1957–1966) and "Ironside" (1967–1975), both starring Raymond Burr, in addition to Rod Serling's anthology series, "The Twilight Zone" (1959–1964), the espionage thriller, "Mission: Impossible" (1966–1973), starring Peter Graves, the action-adventure series "Kung Fu" (1972–1975), starring David Carradine as a Shaolin Monk, and the family drama "Little House on the Prairie" (1974–1983), starring Melissa Gilbert and Michael Landon.

Hank Stohl, born Henry S. Zakowski, was an American film and television actor, as well as a television personality.  He appeared in nearly 30 movies and television shows during a career spanning almost 40 years.  He hosted a children's show on a local Pittsburgh television station, in addition to a variety show in which he interviewed celebrities such as Sammy Davis Jr., Jerry Lewis and THE RIFLEMAN's Chuck Connors.  Following the interview with Connors, THE RIFLEMAN star invited Stohl to appear in the popular western.  After making his guest appearance in THE RIFLEMAN, Stohl went on to appear in many other television shows and even films; however, his main professional credits were for providing narration for commercials.

Stohl had roles in a few memorable films, including General Enders in the thriller "Capricorn One" (1977), starring Elliot Gould, James Brolin, Brenda Vaccaro and Sam Waterson; and the morgue cop in the horror film "Diabolique" (1996), starring Sharon Stone, Isabelle Adjani, Chazz Palminteri and Kathy Bates.  He guest-starred in several popular television shows, including the crime drama "Ironside" (1967–1975), the crime drama anthology series "Police Story" (1973–1977), the comedy "Happy Days" (1974–1984), the police series "Starsky and Hutch" (1975–1979) and the family drama "Little House on the Prairie" (1974–1983).  Stohl made two appearances in THE RIFLEMAN, portraying a cowboy in "Ordeal" (episode 48) and Britt in "Death Trap" (episode 109).

Simon Battle, formerly a deadly gunfighter, has become a doctor as a way to atone for his wild and murderous youth.  When he and his daughter visit North Fork, Dr. Battle is called upon to save the life of a wounded man but is threatened with death by the man's enemies, if he succeeds.  With the help of his friend Lucas, Dr. Battle resolves the situation.