Martin Landau as Miguel, the Patron 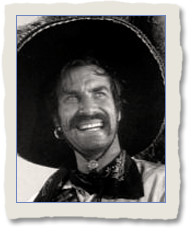 Martin Landau appeared in one episode of THE RIFLEMAN, portraying Miguel, the Patron, in "The Vacqueros" (episode 111).  He also co-starred with Chuck Connors in "Branded" (1965-1966), in "This Stage of Fools."  Landau had a long career in television and later, in film.  He attended Lee Strasberg's Actor's Studio and made his film debut in Alfred Hitchcock's "North by Northwest."  He is perhaps best-remembered for his role as mission specialist Rollin Hand in "Mission Impossible," for which he received two Emmy nominations (1968 and 1969) and won a Golden Globe in 1969.  He later appeared in the television series "Space: 1999."  Landau received two Oscar nominations for his roles in "Tucker: The Man and His Dream," co-starring Jeff Bridges, and the Woody Allen film "Crimes and Misdemeanors," co-starring Angelica Huston.  He won the Academy Award for Best Supporting Actor in 1994 for his portrayal of Bela Lugosi in "Ed Wood."

Ziva Rodann is a Palestinian actress who has worked primarily in television.  She has appeared in 50 movies and television shows during her 16-year career.  Most of her film roles were minor, including uncredited parts in the war drama "China Gate" (1957), starring Gene Barry, Angie Dickinson and Nat King Cole, and the film adaptation of Fyodor Dostoevsky's "The Brothers Karamazov" (1958), starring Yul Brynner, William Shatner and Richard Basehart; Mrs. Catherine Morgan in the western thriller "Last Train from Gun Hill" (1959), starring Kirk Douglas and Anthony Quinn; and Gogo Lazlo in the drama "College Confidential" (1960), starring Steve Allen.

Vladimir Sokoloff, born Vladimir Nikolaevich Sokoloff, was a Russian film and television actor.  He appeared in more than 100 movies and television shows during a career spanning nearly 40 years.  He became an actor and assistant director through the Moscow Art Theatre.  He emigrated to Berlin in 1923, then moved to Paris, eventually embarking for the United States in the wake of the Nazi's rising influence in Europe.  As a character actor, he portrayed characters of various nationalities.  He is perhaps best-remembered for his portrayal of Anselmo in the film adaptation of Ernest Hemingway's "For Whom the Bell Tolls" (1943), starring Gary Cooper and Ingrid Bergman; as well as his role as the Old Man in the western "The Magnificent Seven" (1960), starring Yul Brynner, Steve McQueen, Charles Bronson, Eli Wallach, Robert Vaughn, Brad Dexter and James Coburn.

Than Wyenn as Ramos

Than Wyenn is an American film and television actor who has appeared in more than 140 movies and television shows during a 30-year career.  He has had many film roles, including Ambassador Gaufridi in the award-winning film adaptation of Jerzy Kozinski's novella "Being There" (1979), starring Peter Sellers and Shirley MacLaine and Melvyn Douglas; as well as minor parts in Cecil B. DeMille's Bible epic "The Ten Commandments" (1956), starring Charlton Heston, Yul Brynner and Anne Baxter heading an ensemble cast; and the crime caper "Gambit" (1966), starring Shirley MacLaine and Michael Caine.  He also had a recurring role as Licenciardo Pina in the Disney adventure series "Zorro" (1957–1959). 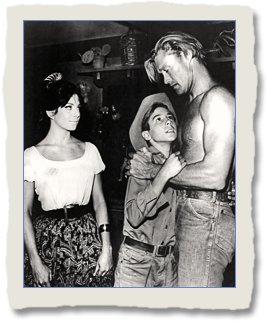 While on a trip to Mexico, Lucas and Mark are accosted by a group of "banditos" who steal their horses, take Mark as a hostage and leave Lucas in the desert to die.  Lucas frees himself and trails the group to a small Mexican village, where he finds the town too frightened of the banditos to fight them.  With the help of a saloon dancer and her aged father, Lucas tackles the task of subduing the bandits single-handed.