Bruce Hayward made one appearance in THE RIFLEMAN, portraying the stagecoach driver in "Sheer Terror" (episode 113).

Charles Macauley was an American film and television actor.  He appeared in more than 70 movies and television shows during a career spanning more than 30 years.  He had a few memorable film roles, including Admiral Herb Corrigan in the disaster film "Airport '77" (1977), starring Jack Lemmon, James Stewart, Joseph Cotten, Christopher Lee and Olivia Havilland; and the President of the United States in the Ron Howard romantic comedy "Splash" (1984), starring Tom Hanks, Daryl Hannah, John Candy, Eugene Levy and Dody Goodman; in addition to various roles in several made-for-TV Perry Mason films.

Paul Wexler was an American character actor of film and television who appeared in 60 movies and television shows during his 30-year career.  Tall and physically imposing, with a deep baritone voice, he was well-suited to play sinister characters and villains.  He made his film debut in the Bowery Boys comedy "Feudin' Fools" (1952), and his most notable film roles were Deputy Sheriff Slim Adams in the film noir thriller "Suddenly" (1954), starring Frank Sinatra and Hayden Sterling, and the arch villain Captain Seas in the adventure film "Doc Savage: The Man of Bronze" (1975), starring Ron Ely.  Most of his other film roles were minor, including an uncredited role in the Cecile B. DeMille Bible epic "The Ten Commandments" (1956), starring an all-star ensemble cast led by Charlton Heston; one of the voices in the Disney animated feature "One Hundred and One Dalmatians" (1961), starring Rod Taylor, Betty Lou Gerson and J. Pat O'Malley in the leading roles; and an uncredited role in the western "The Way West" (1967), starring Kirk Douglas, Robert Mitchum and Richard Widmark. 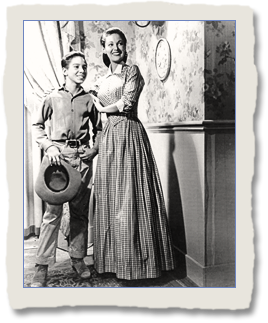 The McCains' good friend Milly is held prisoner, along with young Mark McCain, in her own general store when two gunmen attempt a daring robbery.  Knowing that the North Fork Stagecoach will be carrying $50,000 in cash and will be making a stop in North Fork, they plan to use Milly's store as headquarters to ambush the stage and steal the money.  Milly's quick thinking alerts Lucas and the Marshal in time to prevent the theft.