John Alvin, born John Alvin Hoffstadt, was an American film, stage and television actor.  He appeared in nearly 150 movies and television shows during a 50-year career.  Alvin demonstrated an interest in acting beginning in high school.  He eventually made his way to California to study acting at the Pasadena Playhouse.  Despite having formal training, many of Alvin's roles were uncredited.  "The Lone Ranger" (1949–1957) proved to be a breakthrough for Alvin, who made five guest appearances in the western series.  Following "The Lone Ranger," Alvin went on to act in other popular series, including "Leave It to Beaver" (1957–1963) and "Perry Mason" (1957–1966).  He made one appearance in THE RIFLEMAN, portraying Applegate in "Skull" (episode 124).  In addition to THE RIFLEMAN, Alvin also guest-starred in "The Texan" (1958–1960) and "Cheyenne" (1955–1963).

Lyle Bettger was an American stage, film and television actor.  He attended Dickinson College and graduated from the Academy of Dramatic Arts in 1937.  He went on to appear in more than 50 different films, plays and television shows in a career spanning three decades.  Typecast as the villain, he is best known for playing the role of the wrathful elephant handler Klaus in the film, "The Greatest Show on Earth" (1952). 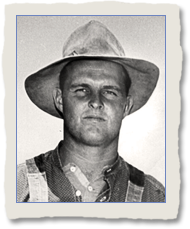 Don Drysdale, born Donald Scott Drysdale, was a right-handed Major League Baseball pitcher who played for both the Brooklyn and Los Angeles Dodgers. Like Chuck Connors, prior to his MLB career, he played basketball, Drysdale at UCLA, and Connors for the Boston Celtics.  In his post-baseball career, he was a radio broadcaster, and later, in 1984, was inducted into the Baseball Hall of Fame.  Drsydale also had a career as an actor, appearing in 12 movies and television shows over a period of nearly 40 years.  Among the TV shows in which he guest-starred, were the variety shows "The Red Skeleton Hour" (1951–1971) and "The Joey Bishop Show" (1961–1965), as well the adventure series "Cowboy in Africa" (1967–1968), starring Chuck Connors.  Connors and Drysdale made one guest appearance in THE RIFLEMAN, portraying Warren in "Skull" (episode 124).

George Willeford was not a professional actor, but was a television personality and trained musician.  He served in the Navy for three years during World War II, then proceeded to earn his M.A. in musical education from Indiana University.  During the 1950s and 60s, he was a local television personality in Indianapolis.  He also served as a weatherman for several years.  He was an accomplished violinist and composer.  He spent many years working as a professor, first at Indiana University teaching acting in radio and television, then later at Butler University, a private university in Indianapolis, Indiana, where he worked from 1971 to 1986.  Willeford made one appearance in THE RIFLEMAN, portraying Mallery in "Skull" (episode 124). 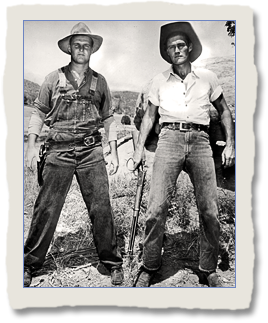 While on a hunting trip, Lucas and Mark becomes separated.  During his search for Mark, Lucas stumbles onto the notorious Skull Ranch, a headquarters for many vicious outlaws in the New Mexico territory.  The outlaws refuse to let Lucas leave, insisting that he will have to accompany them to town and assist them in breaking out two of their comrades from jail.  Lucas tries to refuse, but changes his mind when he learns that the Skull men have found Mark and have taken him prisoner.  He is to be the guarantee that Lucas will cooperate in their deadly plan.  Mark, however, makes an escape and gets to town in time to warn the Sheriff, and Lucas is able to turn the tables on the Skull gang.