Stephen Bekassy, born Istvan Bekassy, was a Hungarian television and film actor.  He appeared in nearly 70 television shows and movies in a career spanning more than 30 years.  He made guest appearances in several popular series, including "The Loretta Young Show" (1953–1961), "Bat Masterson" (1959–1960) and "Perry Mason" (1957–1966).  Bekassy made one appearance in THE RIFLEMAN, portraying Count Brissara in "The Princess" (episode 125). 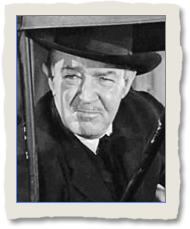 Robert Burton was an American actor of television and film in the 1950s and early 60s.  His first major screen credit was playing Wayne Langmuir in "Desperate Search" (1952), starring Howard Keel and featuring Keenan Wynn.  Appearing mostly in forgettable pictures such as "I Was a Teenage Frankenstein" (1957), "Invasion of the Animal People" (1962), "The Slime People" (1963), his most noteworthy films include "The Bad and the Beautiful" (1952), "The Big Heat" (1953), "Compulsion" (1959) and "The Manchurian Candidate" (1962).  He appeared in numerous television shows, including "You Are There," "The Lone Ranger," "Jane Wyman Presents The Fireside Theatre," "The Californians," "The Texan," "Tales of Wells Fargo," "Dennis the Menace," "Wagon Train," "The Many Loves of Dobie Gillis," and "Walt Disney's Wonderful World of Color."   Burton was one of six actors to play the semi-regular character Doc Burrage in THE RIFLEMAN.  He played the role in just one episode, "The Princess" (episode 127).

Born Annie Goldfarb in pre-World War II France, Annie Fargue (also Farge) was a television and film actress.  She appeared in nearly 20 French and English language movies and television shows in a brief career of 14 years, before returning home to France in the mid-1960s where she became a theatrical director.  In television, she was cast in the title role of the short-lived sitcom "Angel" (1960–1961), co-starring Marshall Thompson.  She guest-starred in several popular series, including the iconic crime drama "Perry Mason" (1957–1966), starring Raymond Burr, and James Michener's "Adventures in Paradise" (1959–1962), starring Gardner McKay, James Holden and Guy Stockwell.  Fargue made one appearance in THE RIFLEMAN, portraying Jennifer in "The Princess" (episode 125).   Behind the camera, she was associate producer of the John Huston film "Victory" (1981), starring Michael Caine, Sylvester Stallone and Pelé, and executive producer of the sci-fi short film "Chip" (2011), starring Joe Amato.

Ron Penfound, "Captain Penny," was an American television personality and radio announcer in Cleveland, Ohio.  He created the personae of Captain Penny in 1953 for a children's program that ran for 16 years.  The show featured a variety of regular live-action characters and thematic spots that aired on different days of the week and around the holidays.  The show was interspersed with "Little Rascals" and "Three Stooges" shorts.   In 1957, a second show, "Captain Penny's Fun House," was spun off to showcase Penfound's character.  Following a 1961 guest appearance by actor Chuck Connors, the radio personality was offered a small role in an episode of the fourth season episode of THE RIFLEMAN.   Penfound, credited as Ron Penford, portrayed Mr. Smith in "The Princess" (episode 125). 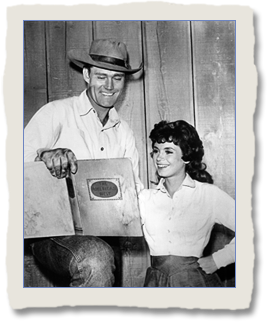 A lovely young girl asks refuge at the McCain ranch for herself and her little brother, who is ill.  Before long, Lucas and his son, who have been speculating about the girl's identity, have reason to suspect they may be harboring a runaway European Princess.