Roy Barcroft was a prolific American character actor.  He appeared in more than 350 movies and television shows in a career spanning 40 years.  Barcroft accidentally fell into acting after being discovered while acting as a hobby to improve his speaking skills for his job as a salesman.  Although most of his early roles were uncredited, Barcroft went on to become one of the most recognizable faces in the western movie genre, often typecast as the villain.  He had a recurring role as Colonel Logan in the western series "The Adventures of Spin and Marty" (1955).  He also made several guest appearances in "Annie Oakley" (1954–1956).  He had a recurring role as Roy in "Gunsmoke" (1955–1975), although he occasionally also played different roles.  Barcroft made one appearance in THE RIFLEMAN, portraying Mr. Stevens in "Outlaw's Shoes" (episode 141).  In addition to THE RIFLEMAN, he guest-starred in numerous other popular western series, including "The Life and Legend of Wyatt Earp" (1955–1961), "Lawman" (1958–1962), "Rawhide" (1961–1965), "Bonanza" (1962–1966), and "Laramie" (1959–1963). 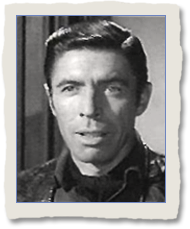 A former friend of Lucas is released from prison and asks him for a job.  Willing to help the man make a fresh start, Lucas agrees, but he doesn't know that the ex-convict is out to recover some stolen money he had hidden on the McCain ranch before he was jailed.  Moreover, Lucas is unaware that the man's former partners are willing to kill to get the money for themselves.