John Rayborn has appeared in nine television shows during a 20-year career.  He served in the U.S. Marines during World War II and was awarded a Purple Heart for injuries sustained during the Battle of Saipan.  He guest-starred in the detective drama "Burke's Law" (1963–1966), the legal drama "Perry Mason" (1957–1966), the private eye series "Cannon" (1971–1976) and the crime drama anthology series "Police Story" (1973–1977).  Rayborn made one appearance in THE RIFLEMAN, portraying Red Evans in "Death Never Rides Alone" (episode 147).  He also guest-starred in "The Big Valley" (1965–1969), starring Barbara Stanwyck. 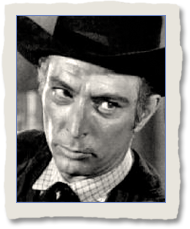 A former gunfighter arrives in North Fork with the intention of settling down and living quietly.  The townsfolk resent him, but Lucas believes in the man and takes his side.  Lucas is put on the spot, however, when other outlaws begin to show up in North Fork, threatening to start trouble with the "retired" gunfighter.