Charles Cooper as Larsen, the Bartender 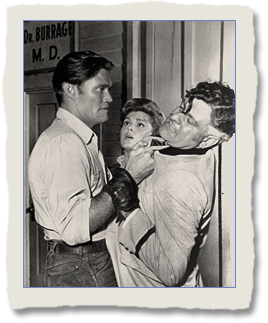 A charming Irishman comes to North Fork announcing that he is there to claim Lou Mallory as his bride.  Her friends are all puzzled, because she agrees to the marriage; although, she seems to dislike and disapprove of the man.  Lucas, whose interest in Lou has becomes more than just casually friendly, finally learns from her the reason for her willingness to go through with the marriage and eventually, to Lou's relief, persuades the Irishman to give up his plans.