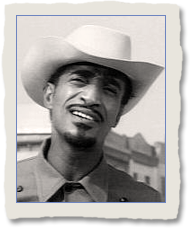 Sammy Davis, Jr. was an American entertainer who began performing at the age of three with his father and uncle in the vaudeville group, the Will Mastin Trio.  Although regarded as a legendary singer and dancer, Davis appeared in more than 60 television shows and movies in a career spanning six decades.  His association with the "Rat Pack," a group of actor/performers famously led by Davis, Frank Sinatra and Dean Martin, became the stuff of Hollywood legend, and various members appeared together sporadically in films from the late 1940s through the mid-1980s, notably "Ocean's Eleven" (1960).  Davis was nominated for numerous awards in his lifetime, including a Tony award nomination for Best actor in the Broadway musical, "Golden Boy" (1964–1966).  He also received many awards and honorifics, including the NAACP's Spingarn Medal (1968) and the NAACP Image Award (1989). He was a Kennedy Center Honoree in 1987, and was awarded posthumously the Grammy Lifetime Achievement Award (2001) and the Grammy Hall of Fame Award (2002).

Richard Devon as Lovett, the Gunslinger

Pat Henry was an American film and television actor, but he worked in the entertainment industry primarily as a comedian.  He made guest appearances in variety and late night talk shows, including "The Ed Sullivan Show" (1948–1971), "The Tonight Show Starring Johnny Carson" (1962–1992), "The Dean Martin Comedy Hour" (1965–1974) and "The Merv Griffin Show" (aired intermittently between 1962–1986)  He also had a few film roles, including Mercidis in the crime drama "The Detective" (1968), and Rubin in the comedy "Lady in the Cement" (1968), both films starring Frank Sinatra.  Henry made one appearance in THE RIFLEMAN, portraying the hardware store merchant in "The Most Amazing Man" (episode 151). 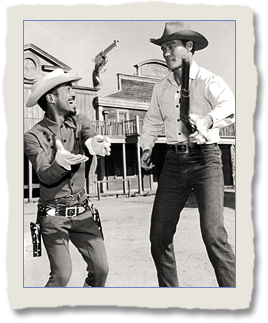 Dapper little Wade Randall appears in North Fork, enchanting the youngsters with his knowledge of firearms and his hair-raising tales of gun battles with notorious bad men.  Lucas suspects Randall may be more talk than truth, and when Randall is challenged to a shootout by the friend of a man Randall claims to have killed, Lucas notes his reluctance to accept the challenge.  Lucas' friendly sympathy brings out the true story—Randall is only a poor railroad cook who has never been in a gunfight in his life.  He's brave enough, however, to resist the temptation to sneak out of town and tells Lucas he's going to go through with the fight. Lucas solves the problem with an ingenious idea that prevents bloodshed on either side.