Jimmy Carter was an American film and television actor who had a short career of just five years.  While attending Mark Keppel High School, he and a friend formed the band "4 Below Zero," and in 1967, the band released the song "It's Sally's Birthday Today" on DoubleShot Records.  He also did an album with Barry Manilow in the late 70s.  During his brief stint as an actor, Jimmy appeared in 12 television shows and one movie, including some of the most popular TV series of the 1950s and 60s.  He guest-starred in the crime drama "The Lawless Years" (1959–1961), "Route 66" (1960–1964), "Leave It to Beaver" (1957–1963) and the long-running western series, "Bonanza" (1959–1973).  He also appeared in the movie "The Jayhawkers" (1959), playing the character Paul Dubois.  Carter made one guest appearance in THE RIFLEMAN, portraying Charley in "Gun Shy" (episode 153).

Pat Goldin was a Russian-born television and film actor.  He appeared in nearly 50 movies and television shows in a career spanning almost 25 years.  Many of his early roles were in films, which were mostly uncredited bit parts.  Among his television credits were roles in the crime dramas "Dragnet" (1951–1959), starring Jack Webb and "Perry Mason" (1957–1966), starring Raymond Burr, and the quirky comedy "The Many Loves of Dobie Gillis" (1959–1963), starring Dwayne Hickman and Bob Denver, as well as a handful of other obscure series.  Goldin made one appearance in THE RIFLEMAN, portraying Fitch the dress salesman in "Gun Shy" (episode 153).

Bob Hall as the Minister

Bob Hall, sometimes credited as Bob Hull, is an American television and film actor.  He has appeared in five movies and television shows in a decade-long career.  He guest-starred in one of the last major anthology series, "Bob Hope Presents the Chrysler Theatre" (1963–1967).  He also portrayed Johnson in the western film "Shalako" (1968), starring Sean Connery and Brigitte Bardot.  Hall made one appearance in THE RIFLEMAN, portraying the minister in "Gun Shy" (episode 153).  He also guest-starred in the western "Branded" (1965–1966), starring THE RIFLEMAN's Chuck Connors.

Jay Nelson as the Stage Owner/Driver

Jay Nelson made one appearance in THE RIFLEMAN, portraying the stagecoach driver in "Gun Shy" (episode 153).

Darryl Richard was an American television actor.  He appeared in 14 television shows in just over a decade.  He guest-starred in several popular shows, including "The Phil Silvers Show" (1956–1959), Rod Serling's anthology series, "The Twilight Zone" (1959–1964), and the popular family comedy "The Donna Reed Show" (1958–1966), in which he played the recurring role of Smitty.  Richard made one appearance in THE RIFLEMAN, portraying Fred in "Gun Shy" (episode 153). 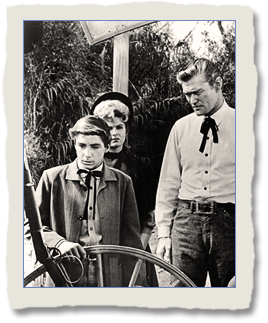 Mark develops a sudden and intense aversion to his father's rifle after a shooting accident takes the life of his friend.  Lucas tries vainly to explain to Mark that the gun is necessary to frontier living, but Mark refuses to accept this, which ends in a quarrel that estranges father and son.  The arrival of a dangerous gunman in town provokes a situation that helps Mark and Lucas resolve their differences.