Martin Kosleck, born Nicolaie Yoshkin, was a German stage, television and film actor.  He appeared in nearly 90 movies and television shows in a career spanning more than 50 years.  Having fled Germany when the Nazis came to power, Kosleck made a career of portraying villainous Nazis.  Prior to leaving Germany, Kosleck attended the Mac Reinhardt Dramatic School, gaining attention for his performance in Shakespearean roles.  After moving to America, he began speaking out against Nazism and was placed on the Gestapo's list of "undesirables."  He is best remembered for his varied but consistently vile portrayals of the Nazi Propaganda Minister Joseph Goebbels.  His impressions are featured in the films "Confessions of a Nazi Spy" (1939), starring Edward G. Robinson, "The Hitler Gang" (1944), starring Bobby Watson, and "Hitler" (1962), starring Richard Basehart.  He also played the role of Tramp in Alfred Hitchcock's mystery romance "Foreign Correspondent" (1940), starring Joel McCrea and Laraine Day.

Stefan Schnabel was a German radio, stage, television and film actor.  He appeared in more than 60 movies and television shows during a career spanning 50 years.  He was the son of the famed classical pianist Artur Schnabel.  He and his family fled Germany when the Nazis came to power in 1933.  As a stage actor, he often portrayed professionals (i.e. military officers, teachers, etc.) in plays by Ibsen, Chekhov, Shaw, Gorky and Schnitzler.  While residing in London, he began acting at the Old Vic, where he worked with John Gielgud, Charles Laughton and Maurice Evans, and also appeared opposite Laurence Olivier in "Hamlet."  After he immigrated to America in 1938, Schnabel not only appeared in thousands of radio programs, but also worked frequently on Broadway, including playing the role of Metellus Climber in Orson Welles' "Blackshirt" rendition of Shakespeare's "Julius Caesar," which was set in Fascist Italy and featured Welles in the role of Brutus.  Schnabel's acting career was interrupted while he served in the United States Army with the Office of Strategic Services.  He is best-remembered for his portrayal of Dr. Stephen Jackson in the CBS soap opera "The Guiding Light" (1965–1981).

Schnabel was cast in minor parts in several notable films, including the translator for the ship's captain in the noir film "Journey Into Fear" (1943), starring Orson Welles; Zeno in the drama "Two Weeks in Another Town" (1962), starring Kirk Douglas and Edward G. Robinson; Andrei Krupitzyn in the drama "The Ugly American" (1963), starring Marlon Brando; the first secretary in the Clint Eastwood thriller "Firefox" (1982); and a party guest in the romantic comedy "Green Card" (1990), starring Gerard Depardieu and Andie MacDowell.  He guest-starred in a few popular television shows, including the crime drama "The Untouchables" (1959–1963) and the suspense series "Alfred Hitchcock Presents" (1955–1962).  He also had a recurring role as Firebeard in the adventure series "Tales of the Vikings" (1959).  He made one appearance in THE RIFLEMAN, portraying the title character in "Old Tony" (episode 168), the last episode of the series.

Karen Sue Trent is an American actress who has worked primarily in television.  She has appeared in just six movies and television shows in a 10-year period.  In addition to television shows, Trent appeared in several commercials.  She guest-starred in the family fantasy series "The Shirley Temple Theatre" (1958–1961), and the family comedy "Leave It to Beaver" (1957–1963).  She made one appearance in THE RIFLEMAN's last episode, portraying Lorrie in "Old Tony" (episode 168).  She also guest-starred in the western "Wagon Train" (1957–1965), starring John McIntyre and Ward Bond. 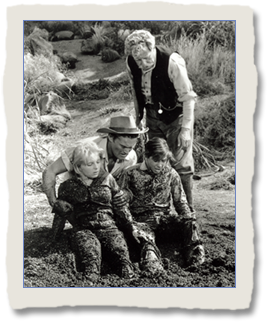 Old Tony, an irascible old recluse, has a reputation in North Fork as a mean old hermit, but shows his good-hearted nature when he helps Lucas rescue Mark and his friend from a swamp full of quicksand.