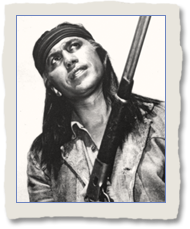 Michael Ansara was an American stage, television, film and voice actor, as well as a director and producer.  Born in Syria, Ansara immigrated to the United States at the age of two.  Originally, he dreamed of becoming a physician, but kindled a passion for performing after taking some acting classes to overcome his natural shyness.  He has appeared in nearly 200 films and television shows in a career spanning more than five decades.  He appeared in several Bible-era epics, including portraying Judas in "The Robe" (1953), starring Victor Mature, Prince Belshazzar in "Slaves of Babylon" (1953), the taskmaster in "The Ten Commandments" (1956), starring Charleton Heston and Yul Brynner, Herod's commander in "The Greatest Story Ever Told" (1965), starring an ensemble cast that included Max von Sydow and Charleton Heston.  In 1999, Ansara had the starring role in the dramatic film "The Long Road Home."  Despite his Middle Eastern heritage, Ansara was often cast as a Native American in his early career.  He is best known for his role as Cochise in the television series "Broken Arrow" (1956–1958), which made him a household name.  A later generation would recognize him for his portrayal of Commander Kang in three installments of the sci-fi franchise "Star Trek."  While working on "Broken Arrow" Ansara met Barbara Eden, whom he later married.  He appeared in two episodes of Eden's hit comedy show "I Dream of Jeannie" (1965–1970), co-starring Larry Hagman.

Ansara appeared in many of the most popular TV shows of the 1950s through 80s, guest-starring in every genre from crime dramas, whodunits, sci-fi, comedy and action adventures to westerns. He appeared in THE RIFLEMAN twice, on both occasions playing Deputy U.S. Marshal Sam Buckhart in "The Indian" (episode 21) and "The Raid" (episode 37).  The storyline had Buckhart coming to North Fork in search of Indians suspected of murdering a Texas Ranger and his family. THE RIFLEMAN episodes were spun-off for a new NBC series, "Law of the Plainsman" (1959–1960) starring Ansara as Buckhart and co-starring Gina Gillespie and Robert Harland.  The series is regarded by some as one of the best television westerns ever made.  Although better know for his role in "Broken Arrow," Ansara also thought that "Plainsman" was a better show.

In his later career, Ansara frequently did voice acting in animated TV shows, movies and video games, including three iterations of the comic superhero in "Batman" (1992–1995), "The New Adventures of Batman" (1997–1999) and "Batman Beyond" (199–2001), playing the villain Mr. Freeze, a character Ansara would reprise in the film adaptation of "Batman Beyond" (1999) and in several "Batman" video games.  He also provided the voice for the recurring character General Warhawk in the animated series "Rambo" (1986).  Mr. Ansara passed away at his home in Calabasas, California on July 31, 2013 at age 91.

Robert Dix, born Robert Warren Brimmer, is an American film and television actor.  He has appeared in more than 40 movies and television shows in a career spanning nearly 20 years.   Dix has appeared in in many films, including in the sci-fi film classic starring Walter Pidgeon and Anne Francis, "Forbidden Planet" (1956), in which he played Crewman Grey; the western drama starring Barbara Stanwyck, "Forty Guns" (1957), in which he played Chico Bonnell; the pulp sci-fi horror film "Horror of the Blood Monsters" (1970), in which he had a starring role with John Carradine; and the western "Five Bloody Graves" (1970), in which he portrayed Ben Thompson.

Dix guest-starred in one episode of the crime drama "Richard Diamond, Private Detective" (1957–1960), starring David Janssen, and he made one guest appearance in THE RIFLEMAN, portraying Davy Clay in "The Raid" (episode 37).  He also guest-starred in the westerns "Gunsmoke" (1955–1975), starring James Arness, and "Rawhide" (1959–1966), starring Clint Eastwood.

Michael Forest, born Gerald Michael Charleboise, is a prolific American film, television and voice actor.  He has appeared in or provided his voice for more than 200 movies, television shows and video games in a career spanning nearly 60 years.  While studying acting under veteran actor Jeff Corey, Forest was discovered by Roger Corman, who cast him his new film "The Saga of the Viking Women" (1957).  He appeared in two more Corman movies and another directed by brother Gene Corman.  While working in the film industry, Forest continued to work as a stage actor, especially in Shakespearean productions.  He has guest-starred in various popular shows, including the off-beat sci-fi anthology series, "The Outer Limits" (1963–1965), Rod Serling's iconic series, "The Twilight Zone" (1959–1964), the crime drama "Perry Mason" (1957–1966), starring Raymond Burr, the war drama "Combat!" (1962–1967), starring Vic Morrow, the espionage thriller "Mission: Impossible" (1966–1973), starring Peter Graves, and the sci-fi classic "Star Trek" (1966–1969), starring William Shatner and Leonard Nimoy.  In recent years, Forest has shifted his focus to voice acting, working primarily on video games and English-dubbed Japanese animation, including "Star Ocean: Till the End of Time" (2003), "Last Exile" (2003) and the late Satoshi Kon's "Paprika" (2006). 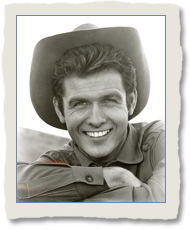 Mark Goddard is an American film actor whose career began in 1959, when he was signed to appear in the CBS Four Star Television series "Johnny Ringo."  Born Charles Goddard, he changed his name to Mark at the suggestion of friend Chuck Connors.  Distinctive for his rugged good looks, he appeared in numerous television series over the next four decades, but especially in the 1960's and 70's.  Goddard made two appearances in THE RIFLEMAN, portraying Walt in "The Raid" and Marty Blair in "Mark's Rifle" (episode 150).  In a television series that aired for three years (1958-1961), Goddard played the role of Detective Chris Ballard in "The Detectives Starring Robert Taylor."  He is best-known for his role as Major Don West, long-suffering space partner and intemperate foil to the wily and conniving, but cowardly, Dr. Zachary Smith (Jonathan Harris), in the hit 1960's cult television series, "Lost in Space."   He made a cameo appearance in the 1998 movie "Lost in Space," playing a superior officer to his former character, Major Don West.  In 2009 Goddard published his autobiography, To Space and Back.

Pat Hogan, born Thurman Lee Haas, was an American film and television actor, as well as a writer.  He appeared in 40 movies and television shows during his 15-year career.  Following his service in the Army, Hogan began acting in minor film roles.  His first major role was Chief Red Stick in "Davy Crockett, King of the Wild Frontier" (1955), and like most of his roles to follow, he was typecast playing Native Americans.  His other film roles include Jim Eagle in "Arrowhead" (1953), starring Charlton Heston, Mungo in "The Last Frontier" (1955), starring Victor Mature, Guy Madison and Robert Preston, and he portrayed Sutamakis in "Indian Paint" (1965), starring THE RIFLEMAN's Johnny Crawford.  In television, Hogan appeared mostly in westerns; although, he also guest-starred in the Disney productions "Zorro" (1957–1959), starring Guy Williams, and "Walt Disney's Wonderful World of Color" (1954–1990), in which he had a recurring role as Geronimo.  Hogan made one appearance in THE RIFLEMAN, portraying Artak in "The Raid" (episode 37).  He also guest-starred in the westerns "Gunsmoke" (1955–1975), starring James Arness, "Brave Eagle" (1955–1956), in which he had a recurring role as Black Cloud, "My Friend Flicka" (1955–1958), starring Frank Ferguson, "Tales of Wells Fargo" (1957–1962), starring Dale Robertson, and "Daniel Boone" (1964–1970), starring Fess Parker.  As a writer, Hogan wrote mainly for men's magazines, for which he received a complimentary letter from famed American author John Steinbeck. 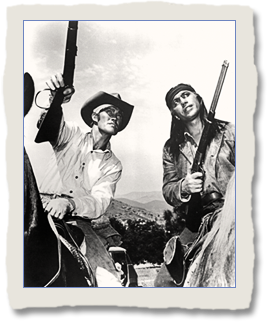 A renegade band of Indians kidnaps Mark McCain and disappears into the New Mexico hills.  Lucas, Micah, and the townspeople form a posse, but it remains for Lucas' good friend, U.S. Marshal Sam Buckhart, himself an Indian, to trail the renegade band and rescue the boy.