Lee Kinsolving, born Arthur Lee Kinsolving Jr., was an American stage, film and television actor.  He appeared in more than 20 movies and television shows during his brief career.  He studied acting under Mary Welch, a member of the famed Actors Studio in New York.  Following a brief stint on Broadway, Kinsolving was signed by the agent Richard Clayton, who guided James Dean and Tab Hunter in their rise to stardom.  Despite his initial success in Hollywood, Kinsolving became disenchanted with the industry and left to pursue other interests.  He had a few film roles, including Pvt. Dean in the war drama "All the Young Men" (1960), starring Alan Ladd, and Sammy Golden in the drama "The Dark at the Top of the Stairs" (1960), starring Robert Preston. 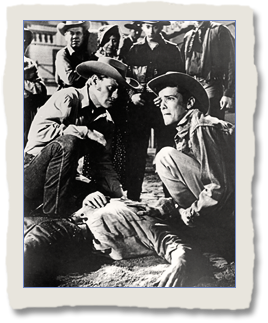 Banker John Hamilton is forced to foreclose a mortgage on Sam Elder, a hard drinking, no account rancher who is six months behind on his loan payments.  Sam flies into a rage, which brings on a fatal heart attack and leaves his 18-year old son an orphan.  Lucas takes pity on the boy and gives him a job as a hired hand.  The boy asks Lucas, who reluctantly agrees, to teach him how to handle a rifle.  What Lucas doesn't know is the boy has secretly purchased a rifle on his own, and as soon as he learns to use it, plans to exact vengeance on Banker Hamilton, whom he blames for his father's death.