Brian Hutton was an American film and television actor, as well as director.  He appeared in more than 30 movies and television shows and directed nine films during a two-decade career.  He made his directorial debut with "The Wild Seed" (1965), starring Michael Parkins and Celia Kaye.  His most notable films include the World War II thriller "Where the Eagles Dare" (1968), starring Richard Burton and Clint Eastwood; the war comedy "Kelly's Heroes" (1970), starring Clint Eastwood, Telly Savalas, Don Rickles and Carroll O'Connor; the psychological drama about a romantic triangle "X, Y, and Zee" (1972) starring Elizabeth Taylor, Michael Caine and Susannah York; and the romantic adventure "High Road to China" (1983), starring Tom Selleck and Bess Armstrong.

Hutton also had acting roles in a few films, including the western "Gunfight at the O.K. Corral" (1957), starring Burt Lancaster and Kirk Douglas, and the western "Last Train to Gun Hill" (1959), starring Kirk Douglas, Anthony Quinn and Carolyn Jones.  In addition to film, Hutton guest-starred in a few popular television shows, including the legal drama "Perry Mason" (1957–1966) and the suspense anthology series "Alfred Hitchcock Presents" (1955–1962).  Hutton made two appearances in THE RIFLEMAN, portraying Deecie in "Long Gun from Tuscon" (episode 121) and Billy Benson in "Obituary" (episode 44).  He guest-starred in several other westerns, including "Gunsmoke" (1955–1975), starring James Arness; "Have Gun – Will Travel" (1957–1963), starring Richard Boone; "Rawhide" (1959–1966), starring Clint Eastwood; "Wagon Train" (1957–1965), starring John McIntyre and Ward Bond; and "Laramie" (1959–1963), starring John Smith and Robert Fuller.  He also had an uncredited part in "Geronimo" (1962), starring THE RIFLEMAN's Chuck Connors in the title role. 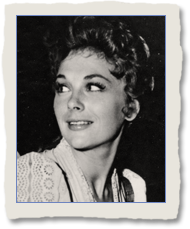 Alexander Scourby was an American stage, film, television and voice actor.  He appeared in more than 80 movies and television shows during his 35-year career.  He got his start on the stage with an apprenticeship at Eva Le Gallienne's Civic Repertory Theatre in Manhattan.  Together with other actors, Scourby helped to establish the Apprentice Theatre, which presented plays at the New School for Social Research in New York City from 1933–1934.   He was also one of the founders of the drama company New Stages, which presented productions from 1947–1948.  His first Broadway role was the player king in Leslie Howard's production of "Hamlet."  He would go on to have many significant roles, including Razumikhin in Rodney Ackland's dramatization of "Crime and Punishment" at the National Theatre in New York.  Despite receiving accolades for his stage work, Scourby is best remembered for his deep and resonant voice heard narrating a wide variety of media, including commercials, documentaries and radio serials.  He broadcast in Greek and English for the Office of War Information during World War II.  His greatest accomplishment was his narration of the King James version of the Bible, which was commissioned originally by the American Foundation for the Blind. 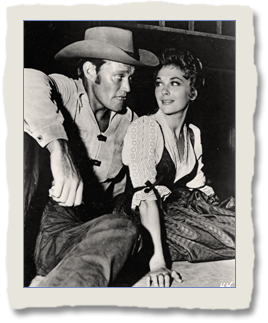 Lucas becomes the target of a young gunslinger because of newspaper articles written about his prowess with a rifle.  The writer of the articles hopes to make trouble for McCain, because he imagines Lucas is romantically involved with his wife, but his plan backfires tragically.