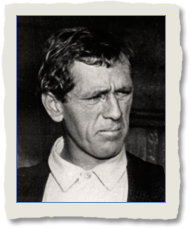 Dick Elliott, born Richard Damon Elliott, was a prolific American film and television actor.  He appeared in more than 350 movies and television shows in a career spanning nearly 40 years.  Many of his roles were uncredited.  He guest-starred in various popular shows, including the iconic family comedies "I Love Lucy" (1951–1957) and "The Andy Griffith Show" (1960–1968), in which he had a recurring role as Mayor Pike, in addition to "The Adventures of Superman" (1952–1958), starring George Reeves.  Elliott made one appearance in THE RIFLEMAN, portraying Hardiman, the apple guy, in "Day of the Hunter" (episode 55).  He also guest-starred in several other westerns, including "The Lone Ranger" (1949–1957), starring Clayton Moore, "The Restless Gun" (1957–1959), starring John Payne, "Maverick" (1957–1962), starring James Garner, and "Rawhide" (1959–1966), starring Clint Eastwood.

Sandy Kenyon, born Sanford Klein, was an American voice and character actor of stage, film and television.  He appeared in more than 120 movies and television shows during his 55-year career.  He had very distinctive features, including a gaunt appearance and prominent cheek bones.  Prior to embarking on his career as an actor, he served in the Army Air Corps as a pilot during World War II.  He had several film roles, including Bones Corelli in the biographical crime drama "Al Capone" (1959), and a real estate agent in the romantic drama "Breezy" (1973), starring William Holden and Kay Lenz.  He also had several recurring roles on television, including Des Smith in the short-lived series "Crunch and Des" (1955), Shep Baggott in the western "The Travels of Jaimie McPheeters" (1963–1964), the voice of John Arbuckle in the animated series "Here Comes Garfield" (1982) and Reverend Kathrun in the primetime soap "Knots Landing" (1979–1993).

Montie Montana was an American actor, stuntman, rodeo trick rider and cowboy.  He worked primarily in television; although, he had numerous uncredited roles in film.  Montana made two appearances in THE RIFLEMAN, playing a cowboy in "The Gaucho" (episode 14) and a stage driver in "Mail Order Groom" (episode 56).  In addition to THE RIFLEMAN, he also appeared in the western series "Gunsmoke" (1955–1975), again playing the part of the stagecoach driver.  In 1994, Montana was inducted into the ProRodeo Hall of Fame, Colorado Springs, Colorado.

Cass Callicott, a famous old Buffalo hunter, arrives in North Fork and makes a point of introducing himself to Lucas and Mark.  He explains that he has been called the best in the country with a rifle; although, he has heard of Lucas' reputation with a rifle.  He challenges Lucas to a target shoot, but Lucas refuses, sure that he would beat an old man who's not as good as he used to be.  Cass mistakes Lucas' refusal for cowardice and suddenly turns vicious.   The old man announces instead of targets, he will prove his prowess by shooting Lucas.  McCain still tries to avoid a fight, but is forced into one when Cass kidnaps Mark.