June Vincent, born Dorothy June Smith, was an American film and television actress.  She appeared in more than 100 movies and television shows during a career spanning 30 years.  She began her career in film during the early 1940s, eventually making the transition to television, where she became known as "television's favorite homewrecker."  She portrayed the leading lady Catherine Bennett in the noir film "Black Angel" (1946), also starring Dan Duryea, Peter Lorre and Broderick Crawford; as well as a minor part in another noir film "In a Lonely Place" (1950), starring Humphrey Bogart and Gloria Grahame.

Christine White is an American film and television actress.  She has appeared in more than 50 movies and television shows during her 25-year career.  She portrayed Carol McCoy in the Dirty Harry film "Magnum Force" (1973), starring Clint Eastwood.  She also had a recurring role as Abigail Adams in the comedy "Ichabod and Me" (1961–1962). 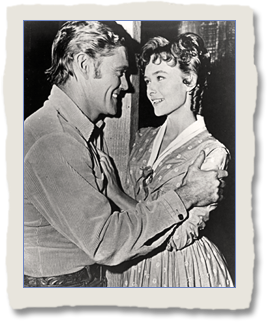 A pretty young widow of a man who was once Lucas' good friend arrives in North Fork on a visit.  She is passing through the territory on her way to claim an inheritance.  She and Lucas are immediately and seriously drawn to each other, but violence intervenes when an attempt is made on her life by two heirs who want her inheritance for themselves.