Clegg Hoyt was an American television and film actor.  He appeared in 85 movies and television shows during a 20-year career.  He had minor parts in a few films, including the romantic comedy "That Touch of Mink" (1962), starring Cary Grant and Doris Day, and the mystery drama "In the Heat of the Night" (1967), starring Sidney Poitier, Rod Steiger, Warren Oates and Lee Grant.

Chubby Johnson, born Charles Rutledge Johnson, was an American film and television actor.  He appeared in more than 90 movies and television shows during a career spanning 25 years.  Prior to becoming an actor relatively late in life—in his 40s—Johnson worked as a journalist and radio announcer.  He became a recognizable character actor, known for his jovial disposition and folksy country accent, which made him well-suited to the western genre.  He had several film roles, including Cap'n Mello in the western "Bend of the River" (1952), starring James Stewart, Julie Adams and Rock Hudson, as well as a minor part in the western "High Noon" (1952), starring Gary Cooper.

Jack Kirkwood was a Scottish-born actor who appeared in 22 movies, short comedy specials and television series in the 1940s, 50s and early 60s.  His earliest credited role was playing Jack in the RKO comedy special "Heart Troubles" (1949), which co-starred Wally Brown.  He teamed with Brown again in a series of RKO comedy shorts, including "Put Some Money in the Pot," "Photo Phonies" and "Brooklyn Buckaroos" (all three in 1950), and also "Tinhorn Troubadors" and "From Rogues to Riches" (both in 1951).  Kirkwood portrayed Mike Floud in the feature-length comedy "Fancy Pants" (1950), which starred Bob Hope and Lucille Ball.  He went on to guest star in several television series, mostly comedies, including one appearance in the first season of "The Real McCoys" (1957), a recurring role as Charlie O'Connell in the third season of "Hey, Jeannie" (1958), several different characters in "The Adventures of Ozzie & Harriet" (1957–1960), and another recurring character, Charley Hackett, in 12 episodes of "One Happy Family" (1961).  He also appeared in the comedy variety show "The Red Skelton Hour" (1957–1961).  Kirkwood made one appearance in THE RIFLEMAN, portraying Colonel Bourbon in "The Horsetraders" (episode 60). 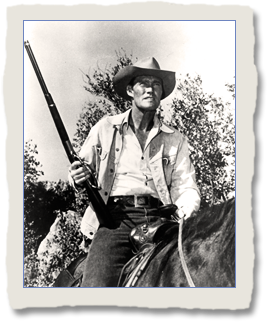 Lucas and Mark try to help out a friend who has been cheated in a horse trading deal, and find themselves involved with not only the dishonest horse trader, but also with two cut-throat thieves.