Sid Gillman, born Sidney Gillman, was best-known as an American football coach.  In 1983, Gillman was inducted into the Pro Football Hall of Fame for his work as a coach, followed by the College Football Hall of Fame in 1989.  He appeared on television primarily from 1959 through the 1960s, usually in cameo appearances portraying a coach, including "Adventure Showcase" (1959) and "Alcoa Theater" (1960).  Gillman was one of four sports legends to guest star in THE RIFLEMAN.  He made only one appearance, portraying bartender Ben Tooker, in "Heller" (episode 62).

Don Grady, born Don Louis Agrati, was an American composer and film and television actor.  He appeared in nearly 30 movies and television shows in a career spanning almost 30 years.  He is best-remembered for having grown up on television as a child actor.  He was a Mousketeer on "The Mickey Mouse Club" and had a recurring role as Robbie Douglas in the long-running family comedy "My Three Sons" (1960–1972), starring Fred MacMurray.  Grady made two appearances in THE RIFLEMAN, portraying Jeff Barrows in "The Patsy" (episode 41) and David Chase in "Heller" (episode 62).  He also guest-starred in many iconic westerns of the 1950s and 60s, including "Wagon Train" (1957–1965), starring Ward Bond and later John McIntire, and "Have Gun – Will Travel" (1957–1963), starring Richard Boone, "The Restless Gun" (1957–1959), starring John Payne and Dan Blocker, "Wichita Town" (1959–1960), starring Joel McCrea, "Zane Grey Theater" (1956–1961), starring Dick Powell, and "Law of the Plainsman" (1959), starring Michael Ansara as Sam Buckheart (a character he also portrayed on THE RIFLEMAN).  Grady arranged and composed 19 television specials and documentaries, including writing and performing the music for the Blake Edwards comedy "Switch" (1991), starring Ellen Barkin and Jimmy Smits, and most recently the "AFI Life Achievement Award: A Tribute to Meryl Streep" (2004).  Grady passed away on June 27, 2012, at the age of 68. 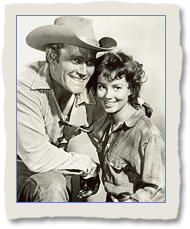 Gigi Perreau, born Ghislaine Elizabeth Marie Thérèse Perreau-Saussine, is an American film and television actress.  She has appeared in nearly 80 movies and television shows during a career spanning 70 years.  She made her film debut as the young daughter of scientist Marie Curie (portrayed by Greer Garson) in the biographical drama "Madame Curie" (1943), also starring Walter Pidgeon as Pierre Curie.  She was cast to play the role for her fluency in French.  At the age of ten, she was given the keys to the city of Pittsburgh for being the "top child movie actress of 1951," making her the youngest actress to receive the honor.  Like many actors who had successful careers as children Perreau struggled to maintain her popular appeal as an adult; although, her accomplishments were acknowledged later, including a star on the Hollywood Walk of Fame (1960) and a Former Child Star Lifetime Achievement Award.

Most of Perreau's many film roles were minor, including an uncredited part in the war drama "The Seventh Cross" (1944), starring Spencer Tracy; Julie in the musical drama "Song of Love" (1947), starring Katharine Hepburn; the character Roberta Blaisdell in the comedy "Has Anybody Seen My Gal" (1952), starring Charles Coburn; Ellen in the romantic drama "There's Always Tomorrow" (1956), starring Barbara Stanwyck and Fred MacMurray; and Susan Hopkins in the war drama "The Man in the Gray Flannel Suit" (1956), starring Gregory Peck, Jennifer Jones and Fredric March. 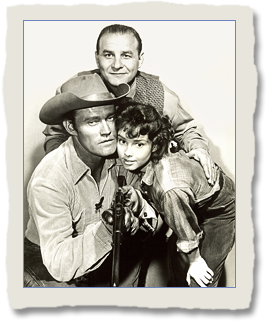 A teenage girl named Heller and her brother are badly mistreated by their drunken stepfather.  Lucas and the townsfolk become involved when the girl is caught stealing from the General Store.  In spite of warnings, the stepfather continues his cruel treatment of the children, driving them to desperation and planning his murder, until Lucas steps in and helps them resolve the situation.