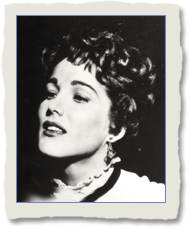 Julie Adams, born Betty May Adams, is an American television and film actress.  She has appeared in nearly 150 movies and TV shows in a career spanning more than 50 years.  Born in Arkansas, she later moved to California to pursue a career in acting.  Most of her early appearances were in B-movie westerns.  She is perhaps best known for her portrayal of Kay Lawrence in the classic science-fiction film "Creature from the Black Lagoon" (1954).  She also made several appearances as Eve Simpson in the mystery series "Murder, She Wrote" (1984–1996).  Adams made one appearance in THE RIFLEMAN, portraying the title character in "Nora" (episode 75).  In addition to THE RIFLEMAN, Adams also guest-starred in "Yancy Derringer" (1958–1959) and "Bonanza" (1959–1973).

Johnny Carpenter, born Jasper Carpenter, was an American television and film actor.  He appeared in nearly 60 television shows and movies over a period of more than 30 years, although most of his roles were uncredited.  He made one guest appearance in THE RIFLEMAN, portraying the stage coach driver in "Nora" (episode 75).  He also guest-starred in a few other popular westerns of the time, including "The Adventures of Wild Bill Hickock" (1951–1958) and "Death Valley Days" (1952–1975).

Michael Stefani appeared in just eight movies and television shows during a 30-year career.  He portrayed Martin Whistler in the sci-fi action film "Trancers" (1985), starring Tim Thomerson, Helen Hunt and Art LaFleur.  His other credits have been in television, including the medical drama "The Eleventh Hour" (!962–1964), the marine corps drama "The Lieutenant" (1964–1966), the marital drama "The Young Marrieds" (1964–1966), the espionage thriller "Mission: Impossible" (1966–1973).  Stefani made one appearance in THE RIFLEMAN, portraying Chad Morgan in "Nora" (episode 75).  He also guest-starred in the westerns "Two Faces West" (1960), starring Charles Bateman, Joyce Meadows and Francis De Sales, and "Bonanza" (1959–1973), starring Lorne Greene, Michael Landon, Dan Blocker and Pernell Roberts.

Murvyn Vye, born Marvin Wesley Vye, Jr., was an American stage, film and television actor who appeared in 100 movies and television shows during his 20-year career.  He studied acting at Yale University and was briefly associated with the Theatre Guild during the 1940s.  While working with the Guild, Vye was cast as Jigger Craigin in its 1945 production of Rodgers and Hammerstein's "Carousel."  The success of the production led to offers from Hollywood for Vye.  Homely and imposing, he was typecast as a heavy.  He had several memorable film roles, including Zoltan in the romantic adventure "Golden Earrings" (1947), starring Ray Millard and Marlene Dietrich; Merlin in the fantasy comedy "A Connecticut Yankee in King Arthur's Court" (1949), starring Bing Crosby; Ken Arok in the musical fantasy comedy "Road To Bali" (1952), starring Bob Hope, Bing Crosby and Dorothy Lamour; and George "Bugs" Moran in the biographical crime drama "Al Capone" (1959), starring Rod Steiger. 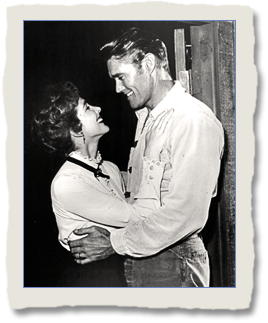 Lucas comes to the aid of a beautiful woman who is being annoyed by a rough gambler.  Too late, Lucas finds his gallantry has involved him in a cold-blooded murder.