Helen Beverly as Sweeney's wife, May

Helen Beverly was an American actress, working primarily in film.  Appearing in just 10 movies, several were uncredited roles, including the classic Biblical drama, "The Robe" (1953).  She appeared in "Green Fields" (1937), her earliest film, and she also appeared in one of the movies in the Charlie Chan franchise, "Black Magic" (1944).  Beverly made one appearance in The RIFLEMAN, portraying May Sweeney in "Seven" (episode 79). 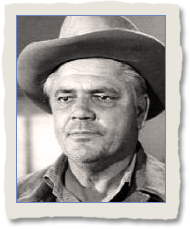 Don Megowan was an American television and film actor.  He appeared in 90 movies and television shows during a career spanning nearly 30 years.  He had a few film roles, including an uncredited part in the romantic thriller "To Catch a Thief" (1955), starring Cary Grant and Grace Kelly, and Luke Phelan in the war film "The Devil's Brigade" (1968), starring William Holden, Cliff Robertson and Vince Edwards.

Bing Russell, born Neil Oliver Russell, was an American film and television actor.  He appeared in more than 150 movies and television shows during a career spanning almost 40 years.  He is the father of actor Kurt Russell.  In addition to his acting pursuits, Russell was the owner of the Portland Mavericks, a minor league baseball team.  He created a baseball park without corporate sponsorship and hired the first female general manager in professional baseball.

Russell had roles in several memorable films, including Robert in the western "The Magnificent Seven" (1960), starring Yul Brynner, Eli Wallach, Steve McQueen, Charles Bronson, Robert Vaughn, Brad Dexter and James Coburn.  He portrayed Vernon Presley in the biographical drama "Elvis" (1979), starring Kurt Russell and Shelley Winters; he played the van driver in the action comedy "Tango and Cash" (1989), starring Sylvester Stallone and Kurt Russell; and he was a Club Ritz patron in the superhero action movie adaptation of "Dick Tracy" (1990), starring Warren Beatty.  He had minor parts in many films, including the noir film "Kiss Me Deadly" (1955), starring Ralph Meeker and Albert Dekker; the western "Gunfight at the O.K. Corral" (1957), starring Burt Lancaster and Kirk Douglas; and the western drama "Rio Bravo" (1959), starring John Wayne, Dean Martin and Ricky Nelson.

Paul Sorenson was an American stage, film and television actor, as well as an ordained minister.  He appeared in nearly 180 movies and televisions shows during a career spanning 35 years.  He graduated from the Pasadena Playhouse, which later honored him with a lifetime achievement award.  He served in the United States military during the Korean War.  Following a standout performance in a theater production of Garson Kanin's "Born Yesterday," Sorenson was signed by a talent agent.  He later co-founded the Orchard Gables Repertory Theater group and ran The Original Actors Workshop with the help of his wife.  He is perhaps best-remembered for his recurring role as Andy Bradley in the long-running drama "Dallas" (1978–1991).

A prison wagon carrying seven incorrigible criminals stops over in North Fork for supplies.  When the seven men escape and barricade themselves in the North Fork Saloon, Lucas agrees to serve as hostage to save the life of Sweeney, the saloon owner.  With Micah's help Lucas turns the tables on the criminals and saves the town.