Steve Darrell, born Darryl Eugene Horsfall, was a prolific American film and television actor who appeared in more than 150 movies and television shows in a career spanning nearly 30 years.  Most of his filmography is in westerns; although, he guest-starred in a few TV shows in other genres, notably the gothic horror crime series hosted by Boris Karloff, "Thriller" (1960–1962).  Darrell made two guest appearances in THE RIFLEMAN, portraying Ben Russell in "Obituary" (episode 44) and Eli Benson in "Dead Cold Cash" (episode 85).

Ed Nelson, born Edwin Stafford Nelson, was an American stage, film and television actor.  He appeared in 185 movies and television shows during a career spanning 50 years.  He interrupted his undergraduate career at Tulane University, New Orleans, to spend two years studying at the New York School of Radio and Television Technique; however, at age 71 he returned to Tulane to complete his coursework and earn a degree.  While living and working in Los Angeles, Nelson was active in the Screen Actors Guild and was a board member for many years.  He remained a long-standing member of the Academy of Motion Picture Arts and Sciences

Sarah Taft was an American film and television actress.  She appeared in more than 50 movies and television shows in a 20-year career.  She had roles in several memorable films, including the part of Sarah in the dramatic comedy "The Reivers" (1969), starring Steve McQueen and Sharon Farrell; as well as minor parts in the Alfred Hitchcock thriller "Vertigo" (1958), starring James Stewart and Kim Novak; the romantic comedy "Donovan's Reef" (1963), starring John Wayne; and the thriller "The Mechanic" (1972), starring Charles Bronson, Jan-Michael Vincent and Keenan Wynn. 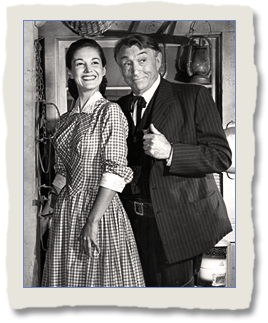 The dead widow of a bandit whom Lucas once shot in the line of duty as the deputy marshal has plotted a grotesque revenge against McCain.  Sara Caruthers' will stipulates that her $100,000 fortune should be divided among the townsfolk of North Fork on condition that Lucas McCain dies within seven days after her death.  At first, it appears that Lucas' neighbors will reject the idea of taking the tainted money, but a notorious hired gunman suddenly and inexplicably arrives in town.