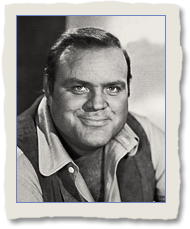 Dan Blocker was an American actor born and raised in Texas.   He attended Texas Military Institute, played football at Hardin-Simmons University in 1946 and later graduated from Sul Ross State Teacher's College in Alpine, Texas, with a master's degree in drama.  Blocker was drafted into the Army and served in the Korean War as a First Sergeant.   Later, in Sonora, Texas; Carlsbad, New Mexico; and California, he taught high school English and drama.

A tall big bear of a man with a tender heart who played roles true to his character, Blocker appeared in several television shows in the late 1950's before landing the role for which he is best-remembered—Eric "Hoss" Cartwright in the long-running NBC western television series "Bonanza" (1959–1973).   He appeared in one episode of THE RIFLEMAN, playing Pete Snipe in "The Sister" (episode 9).

In 1968, Blocker appeared with Frank Sinatra in "Lady in Cement," film sequel to "Tony Rome."  Director Robert Altman befriended Blocker while directing episodes of "Bonanza" and years later, he cast Blocker as Roger Wade in "The Long Goodbye."  Sadly, Blocker died before filming commenced and Sterling Hayden stepped into the role.  Released in 1973, the film was dedicated to Dan Blocker. 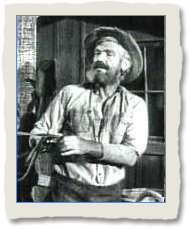 John Dierkes was an American actor who appeared in numerous films and television shows in a career spanning 25 years.  Previously, he worked in the United States Department of State and later joined the Red Cross, serving in Great Britain during World War II, where he met film Director, John Huston, who encouraged him to become an actor.  After the war, however, he returned to government work, but eventually his employer, this time the US Treasury Department, sent him to Hollywood to be a technical consultant on the 1948 film, "The Day the Earth Stood Still."  In the same year, Orson Welles cast him in his adaptation of Shakespeare's "Macbeth."  Dierkes returned to his Treasury Department job, but John Huston coaxed him back to Hollywood to appear in his film, "The Red Badge of Courage" (1951).  Among his numerous film credits, Dierkes portrayed Morgan Ryker in the western classic "Shane" (1053); and he appeared in the Yul Brynner film, "The Buccaneer" (1958);the film adaptation of Gore Vidal's "The Left Handed Gun" (1958), starring Paul Newman; "The Hanging Tree" (1959), starring Gary Cooper; John Wayne's "The Alamo" (1960); and "Oklahoma Crude" (1973), starring George C. Scott and Faye Dunaway.

Lance Fuller was an American television and film actor.  He garnered over 50 credits as an actor during a career spanning more than three decades.  Although he had his start in film, almost all of his early roles are uncredited.  He made one appearance on THE RIFLEMAN, playing Earl Battle in "The Sister" (episode 9).  In addition to THE RIFLEMAN, Fuller also appeared in the westerns "Colt .45" (1957–1960), "Tombstone Territory" (1957) and "Lawman" (1958–1962).

Sherry Jackson is an American actress and former child star who had a prolific career spanning three decades, mostly in television.  She made her film debut at age seven in the 1949 musical "You're My Everything," starring Anne Baxter.  She is probably best remembered for her role as Terry Williams (appearing from 1953 to 1958) on "The Danny Thomas Show."  Jackson appeared in one episode of THE RIFLEMAN, playing Rebecca Snipe "The Sister" (episode 9).

Michael Morgan is an actor who has worked primarily in television.  He has appeared in 13 television shows during a career spanning just over a decade.  He guest-starred in a few popular television shows of the 1950s, including the crime drama "Dragnet" (1951–1959) and the anthology series "Schlitz Playhouse" (1951–1959).  He made one appearance in THE RIFLEMAN, portraying Injun Adams in "The Sister" (episode 9).  He also guest-starred in the westerns "Laramie" (1959–1963), starring John Smith and Robert Fuller; "Tombstone Territory" (1957), starring Pat Conway; and "Gunslinger" (1961), starring Tony Young.

David Tyrell was an American stage, film and television actor.  He appeared in six movies and television shows during a 30-year period.  He began acting on Broadway.  He had minor parts in a few memorable films, including the film adaptation of "All Quiet on the Western Front" (1930), starring Lew Ayres; the comedy "Love Before Breakfast" (1936), starring Carole Lombard; and the musical comedy "It Happened at the World's Fair" (1963), starring Elvis Presley.  He had a recurring role as Charlie Burr in the comedy "Mister Peepers" (1952–1955).  Tyrell made one appearance in THE RIFLEMAN, portraying Roy Thursby in "The Sister" (episode 9). 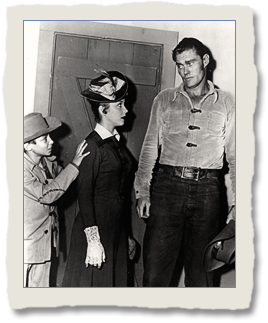 Mark gets his father Lucas in trouble, when he tries to play Cupid between Lucas and a pretty young stranger who arrives in North Fork.  The girl's two older brothers don't take kindly to Lucas' insistence that his meetings with the girl are pure coincidence.  They accuse him of trifling with her affections and challenge him to fight them both.