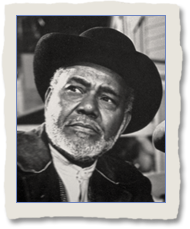 Rex Ingram was an American stage, film and television actor.  He appeared in more than 50 movies and television shows during his 50-year career.  In 1919, Ingram graduated from the Northwestern University medical school.  He was the first African American man to receive a Phi Beta Kappa key from Northwestern University.  In 1929, he made his debut on Broadway, appearing in the original cast in the productions "Haiti" (1938), "Cabin in the Sky" (1940) and "St. Louis Woman" (1946).  In 1962, he became the first African American actor be hired for a contract role in a soap opera when he was cast in "The Brighter Day" (1954–1962).

Ingram's film credits include the role of God in the drama "The Green Pastures" (1960) and the Devil in "Cabin in the Sky" (1943); Tilney in the romantic comedy "The Talk of the Town" (1942), starring Cary Grant, Jean Arthur and Ronald Colman; Sgt. Major Tambul in the war drama "Sahara" (1943), starring Humphrey Bogart; and a minor part in the drama "Elmer Gantry" (1960), starring Burt Lancaster, Jean Simmons and Shirley Jones.  He guest-starred in a few popular television shows, including the espionage series "I Spy" (1965–1968) and the comedy series "The Bill Cosby Show" (1969–1971).  Ingram made one appearance in THE RIFLEMAN, portraying Thaddeus in "Closer than a Brother" (episode 98).  He also guest-starred in the westerns "Branded" (1965–1966), starring THE RIFLEMAN's Chuck Connors; and Gunsmoke" (1955–1975), starring James Arness.

Berry Kroeger was an American radio, stage, film and television actor.  He appeared in more than 90 movies and television shows during his 40-year career.  He was typecast as a shady villain, which made him well-suited for the B-movie circuit.  He had many notable film roles, including Alexandre Dumas, Sr. in the mystery drama "Black Magic" (1949), starring Orson Welles; Packett in the crime drama "Gun Crazy" (1950), starring Peggy Cummins and John Dall; Hugo Baumer in the crime drama "Seven Thieves" (1960), starring Edward G. Robinson and Rod Steiger; and Petrosian in the sci-fi horror "Demon Seed" (1977), starring Julie Christie.

Kelly Thordsen, born Sherman Jess Thordsen, was an American television and film actor.  He appeared in more than 100 movies and television shows during a career of just two decades.  Character actor William Bendix appeared at an LAPD benefit where Thordsen, a motorcycle police officer, was master of ceremonies.  After the performance, Bendix complimented Thordsen and suggested he embark on an acting career.  Playing to type, Thordsen was frequently cast as lawmen.   He had roles in several notable films, including Sheriff Clark in the drama "Sweet Bird of Youth" (1962), starring Paul Newman and Geraldine Page; an uncredited role in the film adaptation of Harper Lee's "To Kill a Mockingbird" (1962), starring Gregory Peck; Federal Purchasing Agent Carroll in the war drama "Shenandoah" (1965), starring James Stewart; and Sheriff L.D. Wicker in the thriller "The Parallax View" (1974), starring Warren Beatty. 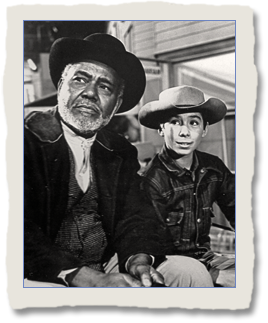 An old enemy from his past terrorizes Micah Torrance to the point that he resigns his job as Marshal and begins drinking heavily.  Lucas beckons the enemy to North Fork, knowing that Torrance will never regain his self-respect until he can face his fear and stand up to the man.